Not to be confused with Unicron

The unicorn, a type of mythical beast famous for its horn, traditionally had the head of a deer, elephant's feet and a lion's tail,[1] but most modern depictions of unicorns show a white horse with a horn, often with more or less eye-searing colors in the mane and/or the tail. Unicorns should not be confused with some rhinos, which also have hooves and one horn.

One common form of the unicorn is described as more goatlike than horselike.[2] Unicorns in the Bible can be violent and deadly,[3] so it's perhaps odd that they have come to be considered "girly" (i.e., cute and kitschy) and gentle creatures (though being cute and violent aren't mutually exclusive).

According to legend, unicorns avoid paths and tend to travel at boundaries; other tales claim that the best way to defeat one involves standing in front of a tree, letting the beast charge you, and dodging so the unicorn will drive its horn on the poor tree getting stuck there. As unicorns are allegedly attracted to innocence, they are susceptible/attracted to virgins.[4] Although some young children believe in unicorns, they tend to doubt at around the same age they stop believing in Santa Claus. Being lairy and fond of a brawl, unicorns are the national animal of Scotland; two featured in Scotland's former royal arms, and a unicorn - with cloven hooves[5] - supports the royal arms of the United Kingdom.[6]

A unicorn horn can reputedly serve as a test for poisons and as a cure for same.[7]

The Bible talks about unicorns a lot, which can be seen here

. Other translations say "wild oxen" but that is blasphemy.[note 1] Answers in Genesis has stated that "To think of the biblical unicorn as a fantasy animal is to demean God's Word, which is true in every detail", even though the KJV is the only version of the Bible that mentions them.[8] Unicorns are jokingly believed to have missed the boat when Noah's Ark set sail and to have become extinct that way, and this idea has been mocked in poems and cartoons.[9]

The virgin birth of Jesus relates to virgin maidens being able to attract and calm down unicorns.[10] This is kind of weird, as apparently in early Christian mythology, the unicorn represented Christ and the Virgin was Mary.[11]

Male narwhals (marine mammals related to whales and dolphins[12]) have a kick-ass facial horn[13] large tooth that erupts from the top of the head and grows forward with a spiral structure. Medieval and early-modern European unicorns had spiral-structure horns that grew out of the fronts of their heads and that were made of ivory. The resemblance indicates that medieval and early-modern narwhal-horn collectors were not lying about the fact that the horns they possessed were the only horns which the animal had and that they grew on the heads of their owners - how they came up with the rest of the animal is open to conjecture.

Interestingly, Darwin mentioned the narwhal as an example of natural selection causing the exaggeration of secondary sex characteristics.

A US patent was issued in 1987, now expired, for creating one-horned goats using surgery.[14] The procedure involves translation of the horn growth buds in young goats to a single point before they emerge. 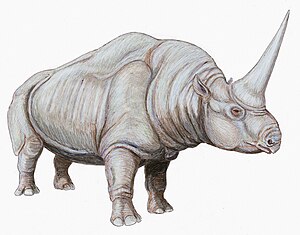 An artistic rendering of E. caucasicum

Elasmotherium is an extinct genus of rhinoceros from Eurasia, some species of which lived as late as 29,000 years ago, and would therefore have lived among modern humans. The Elasmotherium may have been responsible for a Tatar legend of a unicorn-like animal.[15] Elasmotherium sibiricum is also known as the Siberian unicorn.[16]

The Indian, or greater one-horned, rhinoceros also has one horn.[17] It does not look very much like a horse, although rhinos are quite closely related to horses: both are in the order Perissodactyla (odd-toed ungulates).[18]

This very rare animal found near the Vietnam-Laos border has 2 horns but a nickname that relates to its elusiveness: It has never been seen by a scientist and is only known through skulls and from camera traps.[19]

A genus of sturgeon found from the Indian Ocean to Hawaii, they have a long protruberance from their foreheads which looks like a unicorn horn.[20]

It is suggested that the oryx may also be an origin of the unicorn myth. They normally have 2 horns, but occasionally one is lost and they are unable to regrow the lost horn so will remain deficient for the rest of their life. Also, when seen from the side, it may look like a 2 horned oryx only has one horn. The oryx is an antelope, in the family bovidae, and hence more closely related to cows than horses.[21]

There's a unicorn in the sky in the form of the winter (summer, for those in the Southern Hemisphere) constellation of Monoceros (Latin for unicorn). Like its mythical counterpart, it's very elusive, being composed just of faint stars and overshadowed by its much more conspicuous neighbour Orion (and like so many other constellations, you must have a lot of imagination to see its namesake there), but some of its deep-sky objects are worthy of attempting to hunt said unicorn.[22]

North Korea claimed to have discovered a unicorn lair in 2012, and everyone knows that if North Korean state media says something, it must be true, so there you go.[23]Do You Believe That?

The term unicorn has come to represent any fabulous beast which many desire to find and possess, but which proves to be mythical enormously elusive. The term is often, though not exclusively, used in a sexual context. Seeking such is known, predictably, as unicorn hunting. Examples include:

Unicorns are also, of course, a staple of the fantasy genre from My Little Pony: Friendship Is Magic to Dungeons and Dragons, also mixing in elves and the like. While they tend to be presented there as a horse with a horn instead of the more traditional view described above, more or less of the characteristics touched above are present (especially being a generally good-aligned being—at least in D&D—with benign nature deities in some cases using them as their symbols), as a forest-dwelling embodiment of the indomitable side of the wilderness that can be only tamed by a virgin, as well as magical creatures or at the very least their horns.[25]

Unicorns do not have wings in traditional representations. A winged unicorn (an absurd concept, but lots of absurd concepts have Wikipedia pages) is sometimes called a pegacorn, unipeg, cerapter, or alicorn.[26] According to TV Tropes, in situations where hierarchies of fictional equines are found, alicorns are better than both unicorns and pegasi (winged horses), though comparatively rating a pegasus and unicorn is more tricky.[27]