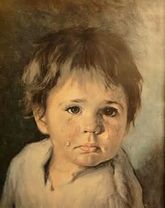 The Crying Boy by Bragolin

who produced paintings of crying children. Prints of it were popular and widely distributed in Europe from the 1950s to the 1980s, its popularity ended due to mass panic over its being "cursed".

Mass panic was propagated by the British tabloid The Sun in 1985. The first article, published in September, brought up Essex-based firefighters who were disturbed by copies of the painting surviving undamaged in several house fires. Over the next two months the story developed into claims that an alarming number of house fire victims were owners of the painting, fueling belief that the painting was somehow causing fires — as opposed to it simply being a very popular painting that was bound to end up in a house fire at some point. By the end of November The Sun began organizing mass burnings of copies to satisfy its readership, apparently forgetting that it was the paintings' not burning that supposedly made them special. An investigation by the TV show Punt PI claimed that the mass-produced paintings were treated with a varnish that contained a fire retardant.[1]

This conspiracy theories-related article is a stub.
You can help RationalWiki by expanding it.
Retrieved from "https://rationalwiki.org/w/index.php?title=The_Crying_Boy&oldid=2405393"
Categories:
Hidden categories: