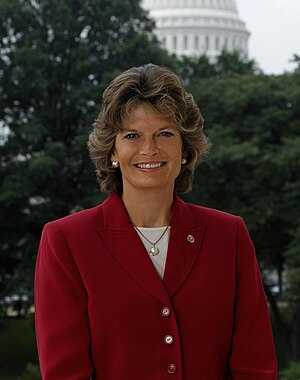 Lisa Murkowski is a Republican Senator from Alaska. She is also the reason that, had Ted Stevens resigned during the investigation into him, Sarah Palin would not have had the ability to appoint a replacement. The previous governor had appointed her to fill out the remainder of his term in the Senate (which he'd given up to be governor.) That governor happened to be Frank Murkowski — her father.

She has since gone on to win a term of her own, in 2004. Some see this as part of riding George W. Bush's coattails while others point to Stevens stumping for her. Either way, to many it removed the taint from the appointment. In 2010 she earned some liberal kudos by beating the Tea Party's anointed candidate for senator Joe Miller, Sarah Palin's handpicked candidate — without even being on the ballot paper.[1]

That said, she's not terrible (for a Republican). She's pro-choice, pro-stem cell research, and is one of three GOP senators who supports same-sex marriage. She also supports S-CHIP, or health insurance for poor kids, and was one of the three Republican Senators (the others being Susan Collins and John McCain) that voted against repealing the Affordable Care Act in 2017, thereby saving health insurance for millions of people. She earned some ire from the Trump wing of the Republican Party when she voted to impeach Trump the second time and was the only Republican on the Energy committee to vote to confirm Deb Haaland,[2] which led Trump to threaten to campaign against her in 2022, although given the newly-implemented ranked-choice voting in Alaska this probably won't be much of a threat to her.[3]

This politicians-related article is a stub.
You can help RationalWiki by expanding it.
Retrieved from "https://rationalwiki.org/w/index.php?title=Lisa_Murkowski&oldid=2296421"
Categories:
Hidden category: