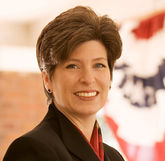 Joni Ernst (1970–) is a wingnut conservative American senator from Iowa who was originally endorsed by the Tea Party.[1] She is proof that Michele Bachmann reproduces asexually.[citation NOT needed]

Ernst has proven herself to fit in as a teabagger, with numerous political gaffes and a number of questionable opinions on many important topics, including opposition to gun control, gay marriage,[2][3] criticism of Obamacare, and while she certainly is a war hawk, she is not a chickenhawk as she has actually served in the military.[4]

Since the decline of the Tea Party, Senator Ernst jumped upon the Trump train like most of the GOP. She became so closely associated with Trump that he initially offered her the VP spot in 2016, but she turned it down, thus paving the way for her fellow conservative Christian Mike Pence to take that role.[5]

Despite predictions that the seat could flip in 2020, Senator Ernest won reelection against Theresa Greenfield by 6.6%.[6]

Before the election Ernst proved she had a loose grasp on the difference between facts and opinions. When a reporter asked her why she felt Obama was not doing enough about Ebola, she called the fact that there was only one infected individual in America an "opinion."

OK, you’re the press and you’re giving me your opinion.[7]

Other brilliant quotes include her belief in some sort of conspiracy related to Agenda 21.

All of us agreed that Agenda 21 is a horrible idea. One of those implications to Americans, again, going back to what did it does do to the individual family here in the state of Iowa, and what I've seen, the implications that it has here is moving people off of their agricultural land and consolidating them into city centers, and then telling them that you don't have property rights anymore. These are all things that the UN is behind, and it's bad for the United States and bad for families here in the state of Iowa.[8]

She appears to have a feeble grasp of the Constitution, specifically Article 6, despite having sworn to defend it. She supported a law that would allow "local law enforcement to arrest federal officials attempting to implement" Obamacare.[9]

She compares cutting spending in Congress to castrating hogs. Though it's doubtful she will support cutting farm subsidies since her family received $463,000 in federal subsidies between 1995-2009.[10]

"I grew up castrating hogs on an Iowa farm. So when I get to Washington, I'll know how to cut pork," Ernst says in the commercial. At the end of the ad Ernst concludes, "Washington's full of big spenders. Let's make 'em squeal."[11]

Even though she voted on increased tax and spending bills for infrastructure in Iowa passionately over 12 times. This includes writing a 31-point list of how to do so if the gas tax did not pass. Which she now dismisses as a silly mistake.[12] Now she states she wishes it just came from "other programs" in Iowa that she doesn't identify.

Ernst believes that Obama became a dictator that needed to be impeached, or removed from office, and prosecuted for crimes against the Constitution. She can't say exactly what those crimes might be besides regurgitating extremist right-wing points about executive actions and overstepping his powers.[13] It is unclear if she supports prosecuting other presidents doing the exact same actions, such as former president George H. W. Bush, whom she proudly displays as endorsing her campaign.

Ernst strangely believes that states can nullify laws passed by the federal government.

She also believes that weapons of mass destruction were found in Iraq.

We don't know that there were weapons on the ground when we went in. However, I do have reason to believe there were weapons of mass destruction in Iraq. My husband served in Saudi Arabia as the Army Central Command sergeant major for a year and that's a hot-button topic in that area.[8]

In a primary debate in 2014, while she claimed that same-sex marriage should be left to the states, she said that she would support a federal marriage amendment limiting it to one man and one woman.[15]

And of course, we could hardly call her a teabagger if she wasn't a global warming denier.

I have not seen proven proof that [climate change] is entirely man-made.[8]

Even though she received a resounding endorsement from the State of Iowa Board of Regents president and large dairy operator Craig Lang that she is a great champion of renewable fuels and Iowa agriculture.

To her credit, she at least seems to acknowledge that she isn't a scientist and doesn't know with certainty whether climate change is man-made. On the other hand, no one is asking her if climate change is real, just what she will do about it.

In 2018, she endorsed Steve King for reelection in both the primary and the general, despite his being openly white nationalist at that point.[16]

In a stopped clock moment, despite her previous opposition to LGBT rights, she opposed the Trump administration's ban on transgender people serving in the United States Armed Forces. Unfortunately, the stopped clock moment was limited to just that, as her spokesperson also said that "She believes taxpayers shouldn’t cover the costs associated with a gender reassignment surgery."[17]

In the lead-up to her 2020 reelection, Ernst made more questionable comments. When asked by some conspiracy theorist whether the COVID-19 case and death counts were exaggerated, she responded that she was:

...so skeptical... These health-care providers and others are reimbursed at a higher rate if COVID is tied to it, so what do you think they’re doing?[18]

Comments like these from prominent stars within the party further legitimized the COVID-19 denialism which has heavily infected the GOP.

She also chose to attack her opponent's dog, first accusing Greenfield of "hiding in her basement taking selfies with her dog, Ringo" and then later "clarifying" that:

We love Ringo and think it’s the perfect name for her dog, because Theresa Greenfield always gets by with a little help from her liberal Washington friends. Actually, a lot of help.[19]

The next Supreme Court Justice will be decided by Dems if we lose the White House and the Senate. Help hold the line. DONATE- 5X MATCH NOW[20]

So much for the Republicans' love of protecting life.

After the 2020 U.S. presidential election, while she did support the certification of the election,[21] she later voted to acquit Trump in his second impeachment[22] and voted against a commission to investigate the 2021 U.S. Capitol riot,[23] suggesting that she’s still on the crazy train even after Trump has left office.

Given that she has an active Twitter account, this list is likely to get longer and more bizarre as her term progresses. Her comments about castrating hogs and making government "squeal" (including the squeal mobile) already feature prominently.