The Year of Living Biblically 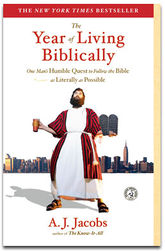 The Year of Living Biblically is a book by American author A.J. Jacobs, in which he recounts his year-long experiment in living according to the commands of the Christian Bible.[1][2] Rather than attempting to adhere to the principles, he instead determines that he will try to obey every direct rule or restriction that he finds. He devotes some days to special attention for one rule or another, such as spending a day telling the absolute truth without any shade of deceit. Nine months are devoted to the Old Testament and three months are devoted to the New Testament. This is in recognition of the preponderance of Biblical commands found in dense books such as Leviticus. Jacobs admits that his division of the year also reflects his secular Jewish upbringing and greater familiarity with the Bible's first half.

By design, Jacobs' experience is a difficult one. Many of the rules of the Bible are ridiculous and silly, which make them perfect for this gimmick. The author has no background in theology and very little spiritual insight, and The Year of Living Biblically seldom engages with any of the philosophy or greater messages of the material. This may in part be because this is not his first year-long experiment; an earlier book, The Know-It-All, was about his year spent reading the Encyclopedia Britannica.[3]

Jacobs does not break any laws, so he is unable to stone adulterers, enslave non-believers, or engage in any of the other abhorrent commands of the Bible. Instead, he engages in various substitutions for those instructions: he drops a pebble on a blasphemer's shoe, pretends his intern is a "slave," and so on. But aside from this mitigation of the most disgusting parts of the text, he genuinely strives to follow the rules. He carries around a special stool so he's not in danger of sitting on an unclean seat (one a menstruating woman might have touched), he grows an enormous beard and side-locks in obedience to the command not to shave, and he even goes to Israel and herds some sheep.

By the time the book concludes, Jacobs seems surprised that his year of immersion in the Bible yields some genuine religious feeling. His daily attempts to pray have become a peaceful moment of meditation, and he feels a connection with the material. This is perhaps the equivalent of spending a year in a pool and being surprised that you learned to swim; cram your life with anything for a year and you'll find a connection to it. After a year of cramming yourself with the Bible on a daily basis, you'll probably feel closer to it. You might even justify some of the atrocities within it to yourself, as Jacobs recounts in one anecdote:

One of my spiritual advisers, Julie Galambush, a professor of religion at the College of William and Mary, explained this tactic [of justification] to me: You simply act as if the Bible doesn't say what it says. There's a passage in Deuteronomy that says the Israelites should offer peace before attacking a city outside the land of Israel. If the city accepts, you take the residents as your slaves. If the city rejects your offer, you kill all the males and make everyone else slaves. For cities inside the land, you don't even offer peace. You just kill everyone: men, women, children, cattle — "save alive nothing that breathes." Pretty shocking stuff. But when talking about this in the midrash, the rabbis completely ignore the bloodletting. Instead, they focus on the part in which the Israelites offer peace. They say, See! The passage is all about compassion (I'm paraphrasing). "It's clear the rabbis have moral objections to this passage," Professor Galambush says. "So they pretend it says something they do believe in — peace — rather than something they object to. You can't underestimate the radicalness of the rabbis."