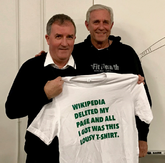 Malcolm Kendrick is a GP, conspiracy theorist author, cholesterol denialist and low-carb diet advocate. He is best known for his controversial claim that high blood cholesterol does not increase the risk of heart disease.

Kendrick dislikes the medical community and argues against the use of statins.[3][4][5] Kendrick is associated with the pseudoscientific Institute for Natural Healing and writes articles for the RT network. He is a leading figure in the cholesterol denialist movement.

Kendrick is a GP based in Macclesfield, Cheshire.[6] He is a member of THINCS (The International Network of Cholesterol Skeptics), a fringe think tank that disputes the role of cholesterol in cardiovascular disease.[7] He is the author of The Great Cholesterol Con.

Kendrick has a few peer-reviewed papers published.[8] In 2016, Kendrick and other colleagues published a systematic review to examine how low-density lipoprotein cholesterol is associated with mortality in older adults. They concluded that "High LDL-C is inversely associated with mortality in most people over 60 years" and since "elderly people with high LDL-C live as long or longer than those with low LDL-C, our analysis provides reason to question the validity of the cholesterol hypothesis."[9] The review was criticized for cherry picking data and confirmation bias. Nine of the authors are members of THINCS. The National Health Service website observes that "the review searched only a single literature database, excluded studies only available in non-English languages, and excluded studies where the title and abstract did not appear to contain information on the link between LDL and mortality in older adults."[10] Medical experts rejected the review's suggestions. Professor Jeremy Pearson, Associate Medical Director of the British Heart Foundation, commented that "there is nothing in the current paper to support the authors' suggestions that the studies they reviewed cast doubt on the idea that LDL cholesterol is a major cause of heart disease or that guidelines on LDL reduction in the elderly need re-evaluating."[11][12]

Kendrick sits on the Medical Advisory Board for the Institute for Natural Healing (INH), a pseudoscientific cancer woo organization.[13] The website advertises unproven cancer cures and promotes dubious vitamin and mineral supplements.[14][15] According to the INH "Natural treatments—even cures—for cancer are all around us. They’re readily available to those who know about them. But they’re actively hidden by Big Pharma, the FDA, and mainstream medicine."[16]

Kendrick endorses a low-carb, high-fat diet (LCHF). He has defended the Atkins diet.[17]

In The Great Cholesterol Con (2008), he argues the above claims but fails to back this up with reliable scientific evidence. It has an irresponsible chapter titled "Eat whatever you like (Diet has nothing to do with heart disease)". Kendrick is not a dietician and lacks education in nutrition. The book makes the following arrogant statement in regard to the above claims:

You may not think it now. But by the time you have read this book, you will be convinced that I am right, and everyone else is wrong.[20]

So the entire medical community is wrong and Kendrick is right.Do You Believe That?

Kendrick continues his crusade against medical scientists in his book A Statin Nation: Damaging Millions in a Brave New Post-Health World (2018). Contrary to what Kendrick has written, clinical and genetic studies have revealed that high blood cholesterol levels increase the risk of heart disease.[21][22] Harriet Hall has written that Kendrick and others from THINCS "cherry-pick the scientific literature to find studies that support their theses, ignore the flaws in those studies, and ignore the vast body of literature that contradicts them."[7]

Kendrick's personal blog and books are filled with Big Pharma and government conspiracy theories. He also thinks a group of vegan activists deleted his Wikipedia article and are targeting other high-fat advocates.[23][24]

He claims anyone that promotes a high fat low carbohydrate diet is somehow "silenced" around the world.[23][25]

Kendrick has found a home as a contributor to the English language website of the Russian RT television network, which is not a great surprise.[26][27]

Kendrick dislikes the UK lockdown for the 2019-20 COVID-19 outbreak and has argued it will cause significantly more deaths.[26][28]