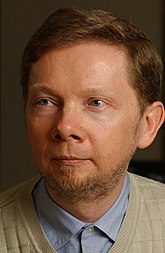 Eckhart Tolle (born Ulrich Leonard Tölle) (1948–) is a New-Age-guru, and garden-gnome-lookalike, promoted by Oprah Winfrey.[1] Eckhart,[note 1] is the author of the mumbo-jumbo bestseller, The Power of Now.

But like David Icke, Eckhart has luckily managed to turn his mental-breakdown into a lucrative publishing career.

Before and during his period of park-bench hopping and proselytizing to strangers, Tolle studied at London University. He was offered a scholarship to do postgraduate research at Cambridge University, which he entered in 1977 but dropped out soon after. In addition to speaking English, Tolle taught classes while speaking Spanish and German.

Despite his education, he became a self-help guru utilizing his knowledge in philosophy, religion, and psychology. There is evidence in his talks that he is widely read, however he often misquotes Descartes, Nietzsche, and Sartre. For example, he erroneously states in his book A New Earth:

The philosopher Descartes believed he had found the most fundamental truth when he made his famous statement: "I think, therefore I am." He had, in fact, given expression to the most basic error: to equate thinking with Being and identity with thinking. The compulsive thinker, which means almost everyone, lives in a state of apparent separateness, in an insanely complex world of continuous problems and conflict, a world that reflects the ever-increasing fragmentation of the mind.[3]:15

Despite Descartes's quote being taken completely out of context, and having wrong meaning attributed to it, it makes for good self-help filler.

Tolle states in his books and talks that he is not smart, but it does appear he was learned enough to create a multi-million dollar empire by using pop psychology, philosophy, Buddhism, New Age woo and other sources.

It's easy to underestimate gurus like Tolle. On the surface he is a calm unassuming man with a German accent, but even a cursory glance at his teachings will show them to be potentially harmful.

Eckhart Tolle's definition of the word Ego is different than most psychologists and dictionaries understand the word to be. Regardless, Ecky's position is that the ego should be removed from oneself to avoid suffering:

The most common ego identifications have to do with possessions, the work you do, social status and recognition, knowledge and education, physical appearance, special abilities, relationships, person and family history, belief systems, and often nationalistic, racial, religious, and other collective identifications. None of these is you.[3]:46

Because fuck your family, your nationality, and anything that makes life worth living. Meditate on this and be free of suffering!

Focus on consciousness as much as you can, and don't think about what I am saying. Just realize the truth of it.

The insanity of the collective egoic mind, amplified by science and technology, is rapidly taking our species to the brink of disaster. Evolve or die: that is our only choice now.[5]

By "evolve" he means "become enlightened", which means "empty your mind of thought and resistance". The Bhagwan Shree Rajneesh cult also used this formula to great effect.

Read The Power of Now chapter on the ego and substitute the word "ego" with "rationalism" or "rationalist". Better yet, read something else. Don't read this shit at all.

This woo-related article is a stub.
You can help RationalWiki by expanding it.
Retrieved from "https://rationalwiki.org/w/index.php?title=Eckhart_Tolle&oldid=2505056"
Categories:
Hidden categories: