From RationalWiki
(Redirected from Low Energy Nuclear Reactions)
Jump to navigation Jump to search
For information on legitimate research into relatively or locally "cold" fusion, see the Wikipedia article on nuclear fusion.

Cold fusion, also called Low Energy Nuclear Reactions (LENR) or Chemically-Assisted Nuclear Reactions (CANR) by its proponents, is the claim of nuclear reactions at relatively low temperatures, rather than at millions of degrees. The most commonly-touted system where cold fusion is supposed to occur is an electrolytic cell with a palladium cathode that is electrolyzing deuterium oxide (a.k.a. heavy water, 2H2O or D2O)), but most recent claims about energy production involve nickel and ordinary hydrogen.

Though the term was first coined in 1956 to refer to muon-catalyzed fusion, it was popularised with the work of Stanley Pons (1943–) and Martin Fleischmann (1927–2012), which gained tremendous publicity but was irreproducible.[1][2] It was then taken up with enthusiasm by cranks, thinking they could be the ones to bring cheap energy to the world. The most outrageous claims include blatant fraud such as the Energy Catalyzer. Cranks also believe there is a massive conspiracy to suppress information about cold fusion.

There are credible scientists working on fusion at less than millions of degrees, but they tend to avoid the term "cold fusion".

A setup similar to Pons and Fleischmann's, from the US Navy tests.

Pons and Fleischmann were electrochemists who had worked together for many years. As they tell it, in 1983 they saw something anomalous and thought "That's funny…"; refining their experiments over the next six years, they finally decided that all chemical explanations had been shown false and that a nuclear reaction was the only remaining possibility.[3] Their paper, "Electrochemically induced nuclear fusion of deuterium,"[4] was accepted by the Journal of Electroanalytical Chemistry March 22, 1989, but was publicized by press conference the next day[5] and was published April 10. They were unable to replicate their process publicly after the press releases.

Pons and Fleischmann's work was quickly discredited by scientists, due to multiple, repeated failures of replication, and a lack of reports of expected neutron flux from the fusion reaction. Deuterium fusion often produces helium-3 as well as substantial amounts of neutrons, an effect that can be demonstrated using a Farnsworth fusor (a hot-fusion device developed by one of the several inventors of television); the canonical experiment involves irradiating a piece of aluminum foil with the fusor and then testing the foil for radioactivity with a Geiger counter. Since neutrons can do this to pretty much any element, including carbon (creating a radiation source within the subject's body), the joke that went around physics labs at the time was, "Did you hear about Pons and Fleischmann's lab tech? He's perfectly healthy." The reaction rate necessary for the reported heat would have produced fatal levels of highly-penetrating neutron radiation.

At the present time, with our current understanding of physics and electrochemistry, cold fusion as Pons and Fleischmann described it is impossible. This is because the energy required to kick start a fusion reaction is very high, and doing it with a mere electrochemical cell is an astounding result — one that would have to have extraordinary evidence to back it up. Cold fusion cranks tout the few physicists, such as Schwinger and Hagelstein, who even entertain the possibility Pons and Fleischmann were onto something. Nevertheless, everyone else thinks they were deluded at best.

The audio company Bose had a close relationship with MIT and decided to research cold fusion on its own, hiring more scientists until it had a multi-person team who explored the topic for two years. By the end, Bose concluded that the excess energy was precisely accounted for by a missing term in the calculations.[6]

Cold fusion was a subject of a years-long Wikipedia edit war between sane people and ardent cranks, eventuating in two arbitration cases, the latter of which unsurprisingly involved Abd ul-Rahman Lomax,[7][8] and resulting in bans handed out like exploding candy. Talk:Cold fusion on Wikipedia still occasionally flares up to this day.

See the main article on this topic: Energy Catalyzer

Entrepreneur, convicted felon, and inventor Andrea Rossi has announced the E-Cat (Energy Catalyzer), a device claimed to generate kilowatt-level heat from nickel and hydrogen. Rossi has explained this as involving the transmutation of nickel into copper,[9] a reaction so ridiculously unfeasible it doesn't occur even in supernovae.[10]

Demonstrations of Rossi's devices have been controversial and insufficient details have been released for independent third-party verification. The claimed reaction has not been supported by independent observers, even by a physicist (Sven Kullander) who has supported the claims of excess heat. Even cold fusion proponents are skeptical of Rossi's claims.

Although they screwed up rather spectacularly, it appears that Pons and Fleischmann were doing low-quality real science, not pseudoscience. Current advocates, however, are well into the realm of the determined pseudoscientific crackpot, as evidenced by the following signs:

There is a continuing failure to find any cold-fusion method that consistently reproduces the supposed effect. The great majority of written-up experiments fail even to obtain excess heat. The primary research effort should be on improving reproducibility; instead, the cold fusion people live in a fantasy where their field has imminent practical engineering applications despite not having even reproducible science. This is a telltale sign of crankery. 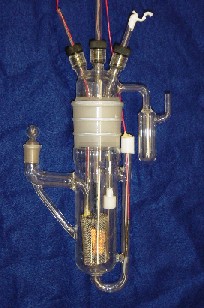 A cold fusion cell from the US Navy tests.

Experiments along the lines of what Pons and Fleischmann did were still being carried out at the US Navy's Space and Naval Warfare Systems Center, until the program was, of course, canceled.[12] Several have been published in the off-topic or fringe journals Naturwissenschaften, the Journal of Electroanalytical Chemistry and the Journal of Fusion Energy.[9]

The most recent comprehensive review of the field (by Edmund Storms, a proponent of cold fusion) was Status of cold fusion (2010),[11] published in a peer-reviewed journal on life sciences and environmental sciences[13] for which Storms is a member of the editorial board.[14] The review claims that there is evidence that the effect exists and involves a nuclear reaction, but in fact the included charts make it clear that the great majority of reports it analyzed observed no excess heat.

was coined in 2002 with the release of a report by Rusi Taleyarkhan and collaborators that claimed to have observed evidence of sonofusion. The claim was quickly surrounded by controversy, including allegations ranging from experimental error to academic fraud. Subsequent publications claiming independent verification of sonofusion were also highly controversial.

Eventually, an investigation by Purdue University found that Taleyarkhan had engaged in falsification of independent verification, and had included a student as an author on a paper when he had not participated in the research. He was subsequently stripped of his professorship. One of his funders, the Office of Naval Research reviewed the report by Purdue and barred him from federal funding for 28 months.[15]

Doubts among Purdue University's Nuclear Engineering faculty as to whether the positive results reported from sonofusion experiments conducted there were truthful prompted the university to initiate a review of the research, conducted by Purdue's Office of the Vice President for Research. In a March 9, 2006 article entitled "Evidence for bubble fusion called into question", Nature interviewed several of Taleyarkhan's colleagues who suspected something was amiss.[16]

On February 7, 2007, the Purdue University administration determined that "the evidence does not support the allegations of research misconduct and that no further investigation of the allegations is warranted". Their report also stated that "vigorous, open debate of the scientific merits of this new technology is the most appropriate focus going forward."[17][18]

Some have argued that the Rayleigh–Plesset equation described above is unreliable for predicting bubble temperatures and that actual temperatures in sonoluminescing systems can be far higher than 20,000 kelvins. Some research claims to have measured temperatures as high as 100,000 kelvins, and speculates temperatures could reach into the millions of kelvins.[19] Temperatures this high could cause thermonuclear fusion. This possibility is sometimes referred to as bubble fusion and is likened to the implosion design used in the fusion component of thermonuclear weapons.

On January 27, 2006, researchers at Rensselaer Polytechnic Institute claimed to have produced fusion in sonoluminescence experiments.[20][21]

using deuterated acetone showed measurements of tritium and neutron output consistent with fusion. However, the papers were considered low quality and there were doubts cast by a report about the author's scientific misconduct. This made the report lose credibility among the scientific community.[22][23][24]

Muons are "heavy electrons", with the same size and electrical charge of ordinary electrons but about 207 times the mass. When a muon replaces an ordinary electron, it will, in the ground state, orbit 207 times closer to the nucleus.[25] If this occurs in a molecule of deuterium, the two nuclei will be drawn close enough together that quantum tunneling may result in fusion to helium.

The highest reaction rate is seen when deuterium and tritium are involved. However, muons have a half-life of about 2 microseconds, and muons tend to stick to emerging alpha particles, so a single muon will catalyze few reactions. To generate useful power, muons would need to be continually produced, and the energy required to generate them with known techniques is much more than is generated by the number of reactions attained. As the reactions take place at temperatures close to absolute zero this is truly cold fusion, and was the first reaction to be so termed. But they tend not to call it that any more.

The term "cold fusion" was actually first used to refer to muon-catalyzed fusion — in a 1956 New York Times article, "Cold Fusion of Hydrogen Atoms; A Fourth Method Pulling Together."[26]

Producing very-high-Z nuclides — new elements not previously observed in nature — is commonly done through arranging collisions of nuclei in particle accelerators at energies below the energy normally needed to penetrate the repulsion of nuclei from each other. It consumes vast energy per atom fused.

This is real, but is only ever brought up in connection with "cold fusion" by woo-pushers trying to claim that their fantasies are in the same category as something that isn't ridiculous. (Compare nanotechnology advocates talking about chemistry or living cells as "nanotechnology" when they're really advocating magical nanoscopic robots.)