From RationalWiki
(Redirected from Hijab)
Jump to navigation Jump to search 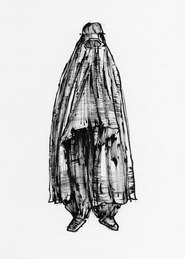 A burqa (also spelled "burka" (برقع)) is an outer garment worn by some Muslim women in particular Islamic traditions to cover their body when going outside of the home or other safe areas. A burqa generally must be thick and drapy enough to conceal the body shape of the woman wearing it, as only her husband and family are allowed to see her form. The niqab is a face veil worn with outer garments and hair veil to have the same basic effect as a burqa. A yashmak is another similar garment, consisting of a veil for both the face and head, leaving only the eyes visible. The burqa raises many issues in the tagging of Facebook photos.

The burqa itself is extra-Qur'anic, having its roots in a pre-Islamic Middle Eastern gender-segregating philosophy known as purdah. The Qur'an uses the term "hijab," which Islamic scholars interpret as meaning "modesty" or "privacy"; the Qur'an does mention veils that can be "drawn over bosoms" (24:31), but Islamic scholars differ on what type of veil this must be.

The history of this particular piece of women's fashion is an arcane study filled with much mystery and contradiction. Veiled figures believed to be powerful priestesses are depicted in statues dating back as far as 2,500 BCE,[2] and veils were later worn by Mesopotamian, Byzantine, Greek, and Persian elite women.[3] It's not a fair comparison to equate the hijab to a whale bone corset

deforming feet, other than being elite practices that could be enforced violently by the literal fashion police.

Conversely, the clothing was either a way for Jewish women to blend in with Greek and Roman society or as a ways for them to stand out from it; if anything like today's fashion world, it could reverse meanings in a generation.[4] Eventually, the fashion of veiling the face lost favor with Jews and Christians and was later embraced by the upper classes of Arabia before then becoming common with the urban poor; like how sports apparel became affordable to chavs, only modest and mandatory.[5]

was produced following his wedding to Zaynab,

when guests became rude and wouldn't leave and only the prophet's wives are specifically mentioned as requiring veils and none wore them during his lifetime,[6] and it has been suggested it was done by women to emulate the prophet's wives.[7] It's worth noting the word hijab originally referred to a curtain like the kinds that partitioned houses, showing the importance of translation, which by that reading would have meant only to speak to the prophet's wives from behind a closed door, not an article of clothing that they wore. 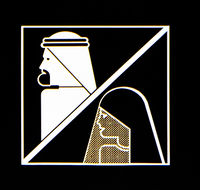 Restroom sign, Saudi Arabia. Apparently, in the categories of "Beard" and "No Beard".

In some parts of the Islamic world, a woman is required to wear a burqa at all times in public, and this is enforced by law. Saudi Arabia has a particularly nasty group of police, the Mutaween, who are most famous to non-Saudis for allowing 14 schoolgirls to die in a fire because the girls were not wearing the proper covering. Afghanistan is another country that, until recently, required women to wear a burqa at all times when outside of the home. Women who did not wear the covering could be arrested and/or beaten.

However, across global Islam as a whole, burqa wearing is not particularly common.[8]

However, there are arguments against bans:

Currently, in no small part due to confusions or even fears of the Islamic religion, several Western countries have addressed the issues of veils and women in a variety of ways. Several countries, cities, and regions in Europe have legislation regulating what women can wear in public. Some specifically ban head coverings, others face coverings, and others more generally restrict religious clothing or symbols. Some have bans only for certain groups, e.g. teachers or government workers, while most restrict the ban to specific locations (e.g. public buildings, schools, universities, public transport).

Austria banned headscarves in primary/elementary schools and Burqas nationwide in legislation passed in May 2019. The ban specifies "ideologically or religiously influenced clothing which is associated with the covering of the head", although apparently it will not apply to Sikh patka and Jewish kippa.[15]

In 2011, Belgium banned the wearing of full-face veils in most public spaces. The punishment is up to 7 days in jail or a fine.[10]

The Danes introduced a law in 2018 which bans the wearing of veils in public places: police can ask women to remove the veil, fine them, or send them home (the last not necessarily a good way to promote integration).[17]

In France, it is not only illegal to wear the burqa at all places, but all religious headscarves are banned in public offices and schools, and this applies to both teachers and students. It has remained unchallenged since 2004, despite protest from most Muslims and some Liberals over the issue of growing Islamophobia and breaching of individual freedom. The French law is wrapped into a whole "protection from religion" law which bars religious manifestations in schools, including Christian crosses and Jewish skullcaps.[18] Nationalist 2017 French presidential candidate Marie Le Pen called for the banning of the hijab and all religious garb.[19] 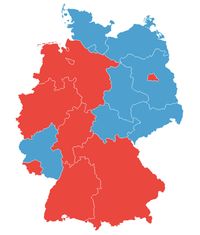 States where headscarves are banned in schools (red).

Several German states ban the wearing of headscarves in schools. Hesse also bans civil servants from wearing them, and Bavaria also bans them in universities, government offices, and polling stations.[20]. There is an anti-mask law (Vermummungsverbot), which is basically a burqa ban.

Italy has some local bans but no national legislation; in some cases, old laws against wearing masks in public have been revived.[10][21]

In the Netherlands, full face coverings such as the burqa have been outlawed in some public spaces, including many public buildings and on public transport.[22] On the first day of the ban, 1 August 2019, the police indicated it was not a priority, leaving its enforcement in doubt.[23]

Full-face veils are banned in schools and universities.

Owing to the variations in religion among Russia's republics, Stavropol bans the hijab, but in nearby Chechnya, headscarves are mandatory in public buildings.[20]

There is no national legislation, but there are restrictions in parts of Catalonia, notably Barcelona, which has banned veils in local government offices, markets, and libraries.[20]

There are bans in the regions of Ticino (Tessin) and St Gallen, with a fine as punishment, but proposals for a national ban were rejected in 2018, with the Swiss federal government leaving it up to individual cantons.[24][25] In 2021, the Swiss voted for a burqa ban.

Headscarves were illegal in predominantly-Muslim Turkey until 2013 as part of legislation aimed at secularization, with a 2016 law also legalising headscarves for police officers. It is still illegal to wear them in the armed forces and judiciary, but they are now generally allowed.[10][20]

While Canada itself hasn't banned burqas, a previous pro-separatist government (led by the Parti Québécois) in Quebec tried to ban religious symbolism worn by public workers, among other restrictions. This "secular charter" was criticized as xenophobic and would have been deemed unconstitutional.[26] Its constitutionality is a moot point for now, given the PQ being tossed from power before it could be tabled.

Afghan women have paradoxically found the Burqa to be useful to resisting the Taliban, in that walking under what is basically a portable personal tent can allow you to hide forbidden objects. Almost all of the images of Afghanistan during the Taliban years (especially images of atrocities) were filmed with cameras underneath burqas and smuggled out of the country the same way.[27]

Other forms of Islamic dress[edit] 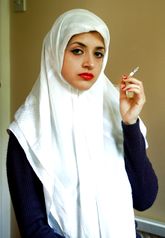 British woman wearing a hijab and smoking a fag. 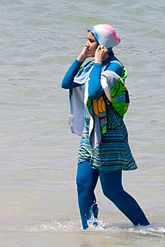 Islam requires that both men and women dress modestly. To this end, many styles from simple long-sleeved shirts to full burka and niqab can be found in any mosque.

The hijab is the most common form of headdress associated with Muslim women. It is a veil that covers the hair only, and is common throughout most of the Middle East, parts of the India subcontinent (such as Pakistan and Bangladesh), and in the Islamic cultures of Southeast Asia (such as Malaysia, Indonesia and Brunei). Often, in Western or Westernized societies, the hijab is worn with typical everyday western wear.

An Abaya is a long coat that covers the body's form.

Many Americans only think of the long black burqa and niqab when they think of Muslim women, but women can be very fashionable, even in the most modest of clothing. Examples of modern conservative Muslim dress can be found at a number of online Islamic clothing stores.

Modest Islamic swimwear for women is often called a burkini or burqini ("burka" + "bikini"). In 2016, the city of Nice, France attempted to ban the burkini even though it is not much different in appearance than a wetsuit; the ban was overturned by a French court.[29]