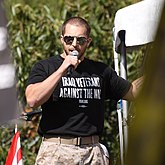 Adam Charles Kokesh (1982–) is an American libertarian anti-war activist, former TV show host for RT and radio host. His radio show, Adam Versus The Man, focuses on American and international current affairs from an anarcho-libertarian perspective. Kokesh also occasionally discusses conspiracy theories and has had some conspiracy theorists on his show, including Mark Dice and Luke Rudkowski.

Kokesh was a corporal in the United States Marine Corps Reserve. Kokesh had previously been a sergeant, but he was demoted and discharged after wearing his uniform at an anti-war protest.[1]

Kokesh has been greatly critical of President Barack Obama's questionable human rights record. He also calls for an end to all of America's war efforts.

In April 2013, Kokesh announced on Alex Jones' radio show that he was planning an armed march in Washington DC on Independence Day.[2] Despite Jones' claim that the aim would be a "government overthrow", Kokesh explained that he and his supporters will be merely engaging in this protest as a means to show peaceful dissent at the Obama administration. The bearing of firearms would merely be a symbolic gesture expressing support of the Second Amendment, which Kokesh believes Obama is in the process of repealing.

Shortly after, Kokesh was held in custody for three months as a result of deliberately violating Washington D.C. laws by carrying and loading a firearm on July 4, 2013. He was also charged for the possession of cannabis and hallucinogenic mushrooms in his home where he was arrested.[3] He was released from prison in November 2013 after pleading guilty on condition that he does not possess weapons of any kind and reports to authorities on a weekly basis[4]

On January 16th, 2018, he declared his candidacy in the 2020 presidential election, making an FEC filing three days before.[5] Hours later, he was pulled over twice in Wise County by Texas Department of Public Safety troopers, and arrested the second time for marijuana and controlled substance possession.[6]

Kokesh's plan for a march on D.C, his subsequent arrest, his desire to end the government and, most especially, his Jewish background[7] have resulted in a brand new batch of conspiracy theories. Some of the most common include the standard antisemitism bullshit that he's in league with the Zionist elites to establish a one world government.[8]

This is hard to swallow for a number of reasons, the biggest being his militant anti-government stances. There's also the fact that Kokesh, despite being raised Jewish, has rejected Judaism and is now an atheist. His unbelief is one reason behind his critical attacks on religion and institutions including the Roman Catholic Church.

Kokesh is also very anti-Zionist due to his opposition towards the Israeli government: the root of many Zionist-related conspiracy theories. He once went so far as to call America "Israel's bitch" citing the government's favoritism towards Israel's interests and helping them in very questionable activities.[9]

Other equally if not more ignorant theories decry Kokesh to be a communist.[10] This rumor is in part due to Kokesh appearing at anti-war rallies sponsored by ANSWER Coalition

(whose members do include those from communist groups, such as Workers World Party). However this is laughable and is a theory created due to theorists not fully understanding his views and/or because they have a dislike of his anti-war activism often resulting in him helping very anti-war groups.

Plus there's one thing that automatically disqualifies him being a communist: he's a supporter of total laissez-faire capitalism. Kokesh has also vocally derided many other political philosophies not adhering to libertarianism which has on occasion included communism.

Kokesh has identified himself as an anarcho-capitalist[11] and has many times espoused the extreme wingnuttery often associated with it. Common things that he's vocally supported include free market anarchism, unregulated gun ownership and goldbuggery. He's especially keen on goldbuggery because he was owner of Agorist Metals: a precious metal store catering to worshipers of shiny metals (now defunct).[12]

Due to his extreme anti-statist beliefs, Kokesh turns it up to 11 in believing there should be absolutely no government regulations, including no environmental protection. After all the invisible hand of the market's done a great job so far, why let anything get in its way?[13] Never mind negative externalities.

Kokesh's views also swing slightly to the left due to his beliefs in the left-Libertarian philosophy of agorism. Kokesh is completely opposed to laws created and enforced by the government. He believes that the only valid laws are natural law. However his words and actions sometimes clash (see next section).

He's also been highly critical of democracy, believing it's a barrier to individual self-determination and that it imposes leaders on people who should be leading themselves.[14] This line of analysis contradicts his support for a political candidate (Ron Paul) and his run for president in 2020.[15] Kokesh claimed, however, that he only ran for President in 2020 as a means to abolish the federal government if elected. He failed.

Kokesh's extreme belief in individual self-governance has resulted in some of his greatest denialism. Like so many libertarians, he's very short sighted when it comes to human behavior. He believes that forcefully overthrowing the state is the be all, end all solution to making things better. Somehow people will just mentally adjust to not want another government, embrace the wonders of capitalism and that somehow those mean elitist businessmen shall just somehow stop treating people like crap.

Needless to say Kokesh, like so many radical right-libertarians, misses the trees for the hills. None of that will happen and given that his ideal society pretty much amounts to capital driven neo-feudalism, things will definitely not be getting better.

However, Kokesh, in typical anarcho-capitalist form, resorts to numerous half-baked answers. These usually amount to the standard textbook right-libertarian reply that somehow the free market will do its thing.[16]

Kokesh has something of a reputation where inconsistency is concerned. An example of this specifically involves the US Constitution. Kokesh has consistently stated that it should be called an "anti-freedom" document[17] and called its enactment a "step back from freedom." Kokesh followed by then saying his ideal America is the "freer" pre-Constitutional one. All hail King George!

Because, as we all know, mob rule, tyranny of local governments and indentured servitude are what true liberty is all about.

Kokesh's actions on the other hand indicate quite the opposite. Just like many other anarcho-capitalists, Kokesh often uses the Constitution to justify his protests, defend himself in court and generally keep himself out of prison.

A recent example of this behavior was at his hearing on October 24, 2013 in regards to his deliberate arming of a firearm in Washington D.C at Freedom Plaza. Kokesh pleaded not guilty to the charges against him. More notably, he defended his actions by citing the Supreme Court's decision in D.C. v. Heller that found the banning of firearms in Washington D.C. unconstitutional. Of course, if the ruling was better examined, it's obvious that he took the ruling out of context to wrongfully state that it was legal to open carry a loaded firearm in the district.[18]

Considering that the Supreme Court's decisions are part of how the Constitution is to be interpreted, it boggles the mind as to why an anarchist who hates the Constitution would use it in his defense. Anarchists are generally opposed to human-made laws and especially the legal documents they originate from. Many anarchists, especially those who are very right-wing, believe that the only true laws in lieu of man-made ones are natural laws: something Kokesh claims are the only valid laws.

As an anarchist, the only logical choice would be to use natural law as a defense for his behavior. Yet Kokesh doesn't do that. His track record instead shows that he has constantly used laws that he says he rejects as fiat to defend his behavior. This is blasphemy in almost all branches of anarchist philosophy not to mention to its adherents.

Kokesh has attempted to justify this contradictory behavior by saying that he uses the Constitution to establish his radical right-wing society. For that Kokesh deserves credit: he's honest enough to admit being a total hypocrite and using laws he supposedly rejects to further his goals of an anarcho-capitalist paradise.

Many of Kokesh's fellow anarcho-capitalists have attempted to defend this position by stating that he was only using the Constitution in self-defense. But this is at best a weak argument when one considers that he constantly goes back to using it as a justification for his actions despite constantly yammering on about how much of an anti-freedom document it is. Because just saying "I don't need the Constitution to justify my actions" is just too hard to say for a bold freedom fighting "anarchist" like himself.

What is far more arguable however is that Kokesh isn't an anarchist but instead a member of the sovereign citizens movement. They too also are notorious for being very hypocritical as well and love jumping behind legal documents like the Constitution to justify their questionable and dubious behavior.

He's not good with promises either[edit]

Kokesh pleaded guilty to charges of drug possession and violating firearm laws at his November 2013 trial. This plea was made in exchange for a far more lenient punishment. In doing so, he broke a promise made in a letter sent from prison that he'd do his utmost to make an example of the government when his case went to court.

As the case was folded due to his guilty plea, the trial never began in order for him to enact his public protest against the government. Kokesh therefore broke his promise.[19] So much for bravery and convictions, eh?

He's even shittier when it comes to intimate relationships[edit]

Seamy details of Koresh's personal life became the focus of minor internet drama in 2016, after his ex-fiancé released a video on Facebook allegating that he was a misogynistic control freak and that he developed a written contract describing their relationship. The alleged contract was leaked and Kokesh's tour manager chimed in, calling Kokesh a "total fraud."[20][21]

Yet even despite all of that, Kokesh has on rare occasions supported reasonable things. He is a staunch advocate of gay rights, and is highly critical of anyone opposing them, especially those who are against gay marriage (unless that person is Ron Paul of course…).[22]

Kokesh also is adamantly opposed to the "War on Drugs," and believes that all laws regulating drugs should be repealed. He has posted videos of himself on YouTube consuming illegal drugs in order to give a middle finger to drug laws. Those videos on his channel have since been set to private.