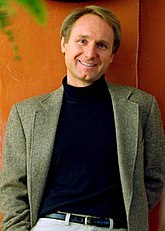 Dan Brown (1964–) is a very successful American writer of action/suspense novels, including The Da Vinci Code, Angels and Demons, and The Lost Symbol. His plot-lines usually involve fact, pseudoscience and pseudohistory mixed in such a way as to leave less aware readers totally confused.[2] How far Mr. Brown himself believes these ideas is a matter for conjecture.[3] Dan Brown has been sued twice by Jack Dunn who claims Brown copied his story and characters from The Vatican Boys (1997) into The Da Vinci Code (2003) and Angels & Demons (2000). Dunn claims that Dan Brown has no talent and has stolen his and that the Robert Langdon series of books and movies are "The Largest Literary and Movie Crime in History" (which is probably true).

Each novel follows almost one boring formula: some important guy dies from unnatural causes; Robert Langdon gets mixed up and, implicated in a conspiracy, has to go on the run looking for historical clues in an over-touristed city with a token female character who is always very beautiful and very smart (but never as smart as Langdon), while being chased by an unstoppable killer. Oh, and one of the "good guys" turns out to be a traitor with a hidden agenda. In the end, nothing is what it seems, and the explanation behind the whole thing is both "rational" and really stupid.

The Da Vinci Code (literally Of [the city of] Vinci Code; da Vinci is not Leonardo's last name) tells the story of a conspiracy to hide the fact that Jesus was married to Mary Magdalene and had children. The novel also depicts the Knights Templar as Gnostics who were in on the secret. The book uses footnotes to back up its outlandish claims even though they are bullshit.

Some of those who should have been keeping the secret decided to leave odd little clues around, Leonardo Da Vinci's The Last Supper being an example of this. A curator at the Louvre was murdered by a sinister albino monk, but not before he managed to leave clues written in his own blood. From this follows lots of running around Europe, the sinister albino monk in hot pursuit, and finally a reading of Leonardo's secret message indicating that the Grail (Magdalene's remains) is buried beneath the pyramid in the Louvre. That's it.

The book was generally derided by critics[6] and the literate,[7] but this didn't prevent it from becoming the second-best selling book of 2004.[notes 2] Conspiracy theories sell — as do books with lots of implausible plot twists, plenty of action and exotic locations all wrapped up in short and easy sentences. The Da Vinci Code became the book that simply could not be avoided, and in the same way that born again Christians feel the need to share their profound discovery with everyone, innocent dinner party participants could scarcely escape having Brown's "revelations" shared with them.

The movie adaptation became the fifth highest grossing film of 2006, behind equally realistic Pirates of the Caribbean: Dead Man's Chest, Night at the Museum, Cars, and X-Men: The Last Stand.[8]

In reality, the Merovingians were some of the most ineffectual royalty in European history. The French know the end of the dynasty as rois fainéants ("do-nothing kings"). The blood of Jesus Christ supposedly in their bloodstream did not prevent the kings from losing most of their power to their majordomos, until Charles Martel claimed the throne himself and ousted the last Merovingian king of France, with claims of divine sanction, in fact.[9]

The background of The Da Vinci Code is borrowed from a book named Holy Blood, Holy Grail. This book was sold as a non-fictional historical account of Christ's relationship with Magdalene and the subsequent cover-ups instituted by the Catholic Church. The authors sued Brown in 2006 for copyright infringement, but the case was decided against them. The judge ruled that history and theories are not protected by copyright law, regardless of their accuracy. He did also state, though, that Dan Brown had lied to the court in his testimony during the trial and that text from Holy Blood Holy Grail was copied. In that same year, Jack Dunn, who is also from New England, sued Dan Brown, Random House and Sony Pictures for copyright infringement in US Federal District Court claiming that Dan Brown stole the entire structure and characters from his 1997 novel The Vatican Boys to create The Da Vinci Code. The judge in the case, Michael Ponsor, ruled that 'there were no similarities' between the books and 'there are no laws protecting structure' and dismissed the lawsuit without a jury trial.[10] Just after he did this, Michael Ponsor made deals with a literary agent and publisher in New York City to publish his own novels even though he had not written any yet. In 2010–2011 Jack Dunn sued Dan Brown and Simon & Schuster claiming Dan Brown copied text from The Vatican Boys to create his main character Robert Langdon. The same judge's court threw out this case too without a jury trial. The next year, in 2013, Michael Ponsor published his first novel through the literary agent and publisher with ties to Random House. In late November 2021, Jack Dunn and his celebrity lawyer and co-author Jonathan Coad published The Da Vinci Fraud: The True Story of Dan Brown and The World's Greatest Literary Crime with Silvertail Publishers of London, claiming, amongst many other illegalities, that Dan Brown withheld evidence in the Holy Blood Holy Grail trial, lied to the courts in the US actions in his submissions of evidence and is one of the most successful conmen of all time.

This was made into another movie starring Tom Hanks. It was marginally better than The Da Vinci Code because it didn't take itself too seriously and knew that the whole thing was a bit of a farce. In this respect, it was not like the book. Plus, the movie changed the story so that Angels and Demons was a sequel to The Da Vinci Code, because apparently only George Lucas and Peter Jackson are allowed to make prequels.

of a brilliant Elon Musk-Steve Jobs hybrid that supposedly discovers the secret of where and how life started, the protagonist and a pretty girl (who also happens to be the love interest of the Crown Prince of Spain, because of course she is) run around avoiding a hitman and searching mystical clues for the fifth fucking time. There is also a talking supercomputer. And the King of Spain and a Catholic Bishop are secretly gay lovers. And apparently the people who run conspiracy theory forums have journalistic integrity.

Brown's first attempt at writing a techno-thriller is more of the same. Most notably a lot of fails in what refers to Spain (cranberry juice being very popular there when said plant in Spain grows only in very localized zones[12]) and especially the city of Seville,

that for him is basically a third-world hellhole with a very poor healthcare system.[13]

Written in 1998, the book is unerringly in favor of the NSA. One of the main villains is an ex-NSA employee who became disgruntled over the agency's intrusion on privacy, and the Electronic Frontier Foundation, a group that spoke out against various NSA initiatives in real life, are portrayed as a swarm of evil hackers who are one point compared to sharks. There's a part where an NSA cryptographer mocks the then recent controversy over the Clipper chip

and claims that, contrary to critics, the NSA's mass surveillance program has prevented a few terrorist incidents, but the government inexplicably wants to keep such successes secret.

fiasco, Brown's last book outside the Robert Langdon series (despite following the same formula) deals with a dumb and convoluted political conspiracy behind the discovery of a meteorite that supposedly contains proof of extraterrestrial life. It makes The X-Files look like Cosmos in terms of realism and scientific accuracy.