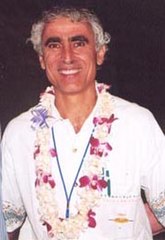 Michael Emin Salla (1958–) is a pseudoscholar and ufologist who created the branch of wingnuttery known as exopolitics. According to this fantasy, extraterrestrial intelligence has been involved in human affairs since at least the 1950s, and various treaties exist governing human/alien relations.

Salla was born in Melbourne, Australia on 25 September 1958. He obtained a bachelor's degree from Melbourne University in 1983, and a Ph.D. (Government Affairs) from Queensland University ten years later. After teaching appointments at various Oz institutions, he was appointed Assistant Professor in the Peace and Conflict Resolution Program, School of International Service, American University, Washington, D.C. in 1996.

He authored a couple of dozen articles on conflict resolution topics in academic journals in the 1990s, then invented "exopolitics", moved to Kalapana, Hawaii, and went into the popular book business, mostly self-published.

He is listed as course instructor at the Exopolitics Institute, along with journalist Paola Harris and former lawyer Manuel Lamiroy. The institute offers a so-called "Galactic Diplomacy Certificate", among other scams "qualifications". The cost of that course is $1500 plus extras for seminar tuition — a trivial investment, really, when one considers what an asset such a certificate would be if applying for a job in, say, corporate management.[note 1]

So if this is such a cosmic secret, how come some random loony in Hawaii knows about it?