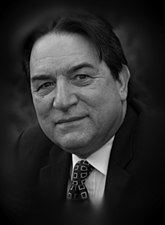 He is, with Stephen Bassett, the co-drafter of the Citizen Hearing, a proposed public forum to create a fact finding process surrounding extraterrestrial phenomena and alleged government suppression of such facts from the public.[5] He is also on the Board of Advisers at free energy nuts the New Energy Movement.[6][7] He is the congressional coordinator for The Disclosure Project.[8]

More recently, Webre has made various claims about the "chronogarchy," a long-running conspiracy to control the world via time travel.[9]

His fans went nuts about the proposed deletion[10] of his puff-piece on Wikipedia (which this RationalWiki article started as a ported copy of), including a threat of a tort over the deletion discussion:

[1]. This is the Wikipedia Editor who erroneously determined there was no Industrial Administration major at Yale in 1964, and on the basis of that states he disbelieves the rest of Webre's career and will exclude it from Wikipedia, giving rise to a civil tort for negligence and malicious interference with business. [2]

'Cos that'd convince any judge anywhere, no worries.

Mr Webre's own comment serves as a one-line explanation of why this RationalWiki article exists:

My view is that Wikipedia's action continues to be part of the CIA time travel controlled US Presidency's retaliation against me for having exposed Soetoro/Obama's participation in a 1980-83 secret CIA jumproom project.[11]

In 1977, he claims to have joined SRI International in Menlo Park, California, as a futurist for the Center for the Study of Social Policy,[3][12] his responsibilities being the studies in alternative futures, innovation diffusion, and social policy applications for clients including the Carter White House Extraterrestrial Communications Study.

Webre has been a leading proponent of the events of September 11, 2001 as a false flag operation employing secret exotic technologies developed by DARPA and CIA including Tesla-based time travel that permitted Donald Rumsfeld to have images of the events at the World Trade Center on 9/11 30 years in advance in 1971. [13] In Nov. 2006, Webre submitted a Memorandum to the U.S. Congress to the chairman of the House Judiciary Committee calling for the appointment of a special prosecutor under Article II of the US Constitution, the Treason Article. [14] Webre was a featured speaker at the 2007 New York City 9/11 Conference; the 2007 Madison, Wisconsin Scholars for 9/11 Truth Conference, and the 2007 Vancouver 9/11 conference. [15]

Until Nov. 2010, Webre was an international war crimes correspondent for Iran's PressTV. [16] In 2011, Webre was interviewed by Jesse Ventura in a TruTV Conspiracy Theory episode on the BP Gulf Oil Spill.[17]

Through the help of former Congressman Dennis Kucinich, the Space Preservation Act was originally introduced into the 107th Congress on October 2, 2001 (HR 2977) and included provisions banning "extraterrestrial" weapons, as well as chemtrails and "exotic weapons systems" such as HAARP. [19] A revised Space Preservation Act (HR 3657) eliminating the prohibitions on space-based extraterrestrial, chemtrails, and exotic weapons systems was introduced to the 108th Congress on January 23, 2002.

Alfred Webre resigned from the Board of Directors of ICIS on January 1, 2011 to focus on a treaty to ban HAARP, which he alleges to be a weapon.[20]