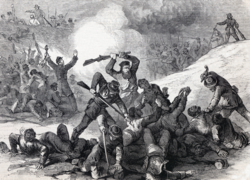 The Fort Pillow Massacre refers to the slaughter of African-American troops in service to the United States by Confederate soldiers following the Battle of Fort Pillow, Tennessee in 1864. The Civil War atrocity was rooted in Southern anger at the Union's use of black troops; the Confederate Congress subsequently decided to treat captured African-American soldiers as rebelling slaves rather than as prisoners of war. As a result, Confederate forces at Fort Pillow deemed their black prisoners as unworthy of honorable treatment and murdered them. The Confederates killed roughly 300 black soldiers and 100 white soldiers.[2]

The event caused a major political uproar in the North and became a rallying cry to defeat the rebels once and for all.[3] The commanding officer of the Confederates, General Nathan Bedford Forrest,

went on to help found the Ku Klux Klan.[4] What a nice guy.

The Union's use of black troops in the war, combined with President Lincoln's Emancipation Proclamation royally pissed off the Confederacy. The Confederate Congress officially declared that they viewed Lincoln's actions as an attempt to induce a "servile insurrection".[5] In 1863, the Congress of the Confederate States issued a joint resolution calling for this slave revolt to be met with "full and ample retaliation".[5] In effect, any black soldier captured by the South could and would be punished without any form of due process; this could go as far as execution.

This policy quickly translated into action. During the Gettysburg campaign, the Army of Northern Virginia (Robert E. Lee's command) systematically kidnapped free blacks and escaped slaves as they invaded Maryland and Pennsylvania. Men, women and children were all captured and carried back into Virginia during the army’s retreat, potentially more than a thousand people.[6] Once they had been forcibly taken south, the blacks were returned to their owners if possible or else sold at auction.[6] These prisoners were referred to in Confederate communications as "captured contrabands."[7]

In addition to this, there were other massacres of black soldiers conducted by Confederates. The Battle of the Crater ended with Robert E. Lee's soldiers killing surrendering blacks,[8] while Ransom's brigade committed a similar atrocity in North Carolina with one of the officers later writing, “it is understood amongst us that we take no negro prisoners."[9]

Truly the Confederacy fought nobly for their bold cause! 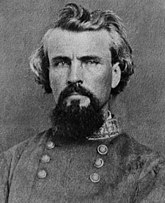 General Forrest: not a good man.

In the later years of the Civil War, the North successfully occupied much of Tennessee and Kentucky; Confederate General Nathan Bedford Forrest, operating as a semi-independent cavalry commander, launched a number of raids to disrupt Union operations there.[10] During these raids, Forrest attempted on occasion to bluff Union-held forts into surrender by declaring that he would offer no quarter once he began attacking.[11] He quickly became well-known among Union officers for these "surrender or die" ultimatums. Again, what a nice guy.

Sticking to his MO, Forrest demanded the surrender of Fort Pillow under a flag of truce. However, his men violated that truce by sneakily placing themselves into an attack formation around the invested fort.[12] The Union commanding officer believed Forrest was bluffing and refused, prompting the Confederates to swarm the fort and overwhelm the garrison.

At this point, the massacre began, with Union survivors reporting that they threw down their weapons only to be shot and bayoneted while Confederate officers ordered their subordinates to give no quarter.[13] A subsequent inquiry by the United States Congress uncovered further details about the horrific scene:[14]

All around were heard cries of "no quarter," "no quarter," "kill the damned niggers," "shoot them down." All who asked for mercy were answered by the most cruel taunts and sneers. Some were spared for a time only to be murdered under circumstances of greater cruelty. No cruelty which the most fiendish malignity could devise was omitted by these murderers. One white soldier who was wounded in the leg so as to be unable to walk was made to stand up while his tormentors shot him. Others who were wounded and unable to stand up were held up and again shot. One negro who had been ordered by a rebel officer to hold his horse was killed by him when he remonstrated.

The Congressional report also discovered further atrocities such as torture committed during the massacre:[14]

One man was deliberately fastened down to the floor of a tent, face upward, by means of nails driven through his clothing and into the boards under him, so that he could not possibly escape, and then the tent was set on fire. Another was nailed to the side of a building outside of the fort, and then the building was set on fire and burned.

The morning after, the Confederate troops searched the corpses for any survivors, killing those they found and haphazardly heaving them into ditches after the job was finished.[14] After that, a Union gunboat was permitted to collect the dead.[14] The wounded who were successfully collected and were strong enough to speak all testified to the slaughter which had taken place, later prompting the Congressional investigation.[15] General Forrest himself later referred to the act as the "wholesale slaughter of the Garrison at Fort Pillow."[16]

Union outrage over the massacre came swiftly. Lincoln's Treasury Secretary wrote him a letter asking him to begin enforcing an executive order he had signed in 1863, declaring that every Union soldier extrajudicially executed would be avenged with the death of a Confederate prisoner.[18] At the orders of General Ulysses S. Grant, Union generals negotiating prisoner exchanges demanded that the Confederates change their policy towards black prisoners or else risk a complete breakdown in prisoner negotiations with the Union as well as retaliatory violence.[19] The Union's increasingly insistent voicing of this threat led most of the Confederacy's soldiers to reluctantly treat captured blacks as legitimate prisoners for the remainder of the war.[20]

During a cabinet meeting with Lincoln, several cabinet officers pushed for an official resolution declaring that Forrest would be put on trial for his deeds at Fort Pillow should he ever be captured.[21]

Lincoln allegedly began crafting orders for generals in the Union army to confront their Confederate officers about the massacre, but he became "distracted" by other matters.[22] This is sad, but not unsurprising considering Lincoln's heavy involvement in almost all affairs concerning the conduct of the war.

Meanwhile, newspapers in the United States reacted with extreme hostility and anger. The Chicago Tribune for instance, wrote that:[3]

"The blood of four hundred United States soldiers, shot down after they had surrendered as prisoners of war, and their bodies hacked and slashed to pieces, is crying to us from the ground [...] We must fight these rebels with their own weapons. If they shoot and starve our prisoners, treat theirs to the same dose. We must take off our gloves and go into this business as if we meant something."

"Died in the action" huh?

The massacre is still mired in controversy with public denial of the events still a problem.[23] Whitewashing efforts have targeted Forrest's history as a slave-trader and his history with the KKK along with the Fort Pillow Massacre in an effort to justify preserving statues of the man which had been erected across the South during the post-Reconstruction era.[24] Meanwhile, the Fort Pillow State park treats the massacre softly in its official materials, referring only to the presence of a "controversy" surrounding the battle and that General Forrest may have "lost control over his troops."[25]

Despite eyewitnesses among the Confederates pointing out that Forrest was present and was ordering the killings, his defenders claim that he wasn't responsible for the atrocities and that the atrocity shouldn't even be referred to as a "massacre" due to its relatively small body count,[26] even though fifty times more people were killed than in the Boston Massacre, and no one's suggesting changing the name of that incident. Meanwhile the massacre plays into the protests over the various statues of Forrest. This has also given it a place in national politics; the Republican-controlled Tennessee legislature imposed a financial penalty on the city of Memphis in retaliation for its local authorities tearing down a statue of Forrest, citing among other things his participation at Fort Pillow.[27]