From RationalWiki
(Redirected from Ochlocracy)
Jump to navigation Jump to search 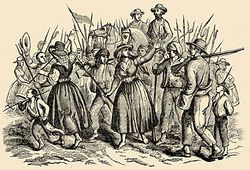 You don't mess with the mob. They have the beer. And blackjacks. And pitchforks.

Mobocracy (literally "rule by the mob") is a layman's version of the term ochlocracy (Greek: οχλοκρατία), where the will of the majority rules and disputes are often settled by brute force or the sheer weight of people. Another word is majoritarianism, for obvious reasons. The term "mobocracy" has been in use since the 18th century, often used as a pejorative description of democracy.

Mobocracy can be considered to be the ruling principle of sites like Wikipedia. Although Wikipedia has rules which must be followed to regulate the behavior of users and the content of its articles, it is generally "run" by mass consensus. Votes are occasionally used, implying some level of democracy, but are generally discouraged in favor of discussion. Again, this idea is enforced by the mass consensus that this idea is a Good Thing.

Apart from wiki projects, which tend to borrow Wikipedia's philosophies, few community websites explicitly run on mobocracy-type systems of anarchic self-government and self-regulation. Usually, control is held by only a select few staff and admins who patrol and control content. As a result, normal users lack the power to partake in the mob. Intentionally anarchic imageboards such as 4chan are a notable exception and are about as close to literal mob rule as possible... except for all the janitors, mods, and admins. Okay, it might not be a mobocracy, but it's pretty desolate.

Mobocracy is the openly stated governing principle of RationalWiki. In this case, however, its use is part snark and (most likely) part laziness on behalf of the site's founders. It certainly has no basis in the violence associated with mob rule in real life.

The mobocracy in this respect means that users, by bickering, shouting, unilateral actions, complaints about unilateral actions, and ad hoc voting, eventually reach a mass consensus. This consensus eventually forms a general site policy — which is subject to being overturned or ignored by the mob at any time — that is documented in the Community Standards page. The drawback to this is the difficulty in actively involving every single user in policy discussions, but it does mean that there are no "better" classes of users who can make unanswerable decisions. Even elected moderators can be called out for being asshats.

Per The Tyranny Of Structurelessness,[2] hierarchy tends to emerge in human interactions; the hazard of expressing anti-hierarchy is that the structure forms out of sight, instead of where people can keep an eye on it. In ochlocracy/mobocracy, this usually leads to rule not necessarily by a majority consensus, but by the most persistent, aggressive, and ballsiest people. On the internet, these are the people with the time to stay up late and keep posting long after everyone else has had enough, and in the real world it usually refers to anyone with the most guns.

So, all humans all SNAFU as usual, then. There's always a social hierarchy.