From RationalWiki
(Redirected from Only a theory)
Jump to navigation Jump to search
Not to be confused with conspiracy theory, the furthest approximation to the truth. 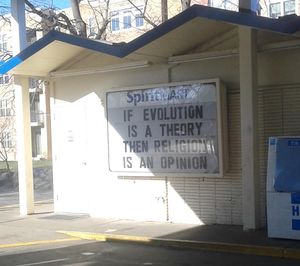 This argument played out with hilarious ramifications in the 2008 decision of the Florida State Board of Education to teach evolution as a "scientific theory".[3] Apparently, the creationists on the Florida SBOE saw this as a "compromise" — making evolution a "scientific theory" at law, they thought, would weaken the position of evolution. After all, then it would be "just a theory", right?[note 2] Wrong! This "compromise" actually puts evolution on the exactly right footing — at the highest tier of science — and ensures that students can learn what the term "scientific theory" really means, hopefully eventually drawing the sting of confusion with the colloquial meaning.[note 3]

Sometimes this argument is inverted, taking advantage of the scientific definition for "theory" and claiming that conspiracy theories are fact based on this ambiguity.

Science's understanding of the Universe is indeed subject to change — otherwise it would be incapable of making any use of new technology and would be pointless. While people often say that this means all current scientific knowledge is "wrong", this is far from the right way of describing it. If a theory produces good results, it is right, but when it doesn't, it's best described as inaccurate. Theories will usually evolve from a less accurate to a more accurate version of reality. One of the major misconceptions is that when theories change the change is massive and total. When discussing the "Relativity of Wrong",[4] Isaac Asimov quipped that someone "living in a mental world of absolute rights and wrongs, may be imagining that because all theories are wrong, the earth may be thought spherical now, but cubical next century, and a hollow icosahedron the next, and a doughnut shape the one after." But this is clearly not the case, and applies as much to the microscopic, nuanced worlds of atomic theory and theoretical physics as it does to more obvious examples such as the shape of the Earth.