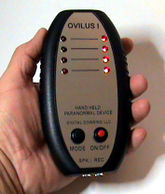 The amazing device in question.

An Ovilus is a mechanical device that allows the user to communicate with the dead for only $599.00.[1] It was designed and created by Bill Chappel and distributed through his website digitaldowsing.com. It works by using sensing equipment which measures temperature and electromagnetic fields. These readings are combined and each combination of readings corresponds with a database of words. The Ovilus then "speaks" that word allows the dead spirit to speak the words.

The Ovilus is used by paranormal research groups to test areas for the existence of dead spirits. It was even used "successfully" in two paranormal "reality" television series: Ghost Adventures and Paranormal State.

But wait! There's more! There is also an iOvilus app available for iOS which allows your iPhone to "communicate with the dead." It is likely that this app would be even less useful than the handheld version due to accuracy issues with the iPhone's sensors, which have limited resolution. It is also true that the handheld version is little more than a Speak & Spell toy

Amazingly, the Ovilus is not the craziest item for sale on its website. Besides different versions of the Ovilus and EMF generators, there are a variety of apps that allow you to "recharge your crystals" (whatever that means) and even talk to the Earth.[2]