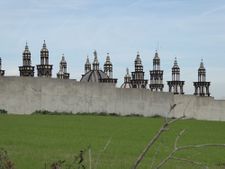 The cathedral of Palmar de Troya, along with its mandatory cult compound wall.

The cult's origins can be traced back to a number of schoolgirls who claimed to have had a vision of the Virgin Mary in the 1960s. Even though the real Catholic Church dismissed the claims as bunkum, religious nuts flooded into the town, eventually leading to the formation of an oppositional church built on more supposed visions of the Virgin Mary.[2] The Palmarians view Pope Paul VI as the last legitimate pope, and based on their leaders' drug trips "visions" they hold that the true papacy now resides in their little Spanish town.

The Palmarian "Church" displays many of the trademark traits of a cult:[3] manipulation and exploitation of its followers, exalted leadership, totalitarian restrictions on personal conduct, forced separation from the outside world, and, of course, financial shenanigans. Ex-members of the cult emerge damaged and impaired due to their prolonged separation from reality.

With most of its membership aging and dying off, the cult is probably most notable for the stark light it shines on how thin the line is between a legitimate religion and a bunch of crazy LARPers playing dress-up.

Dan Brown featured them as villains in one of his novels, Origin, because of course he did. 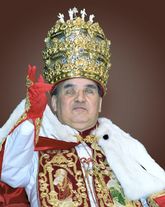 Four teenage girls from El Palmar de Troya claimed to have seen an apparition of the Virgin Mary in a tree for unknown reasons. The Catholic Church dismissed these claims, but the resulting commotion led to a number of other "visions" experienced by yet more people who hoped to get their fifteen minutes of fame as well as a quick buck.[1]

Eventually, a man named Clemente Domínguez used the opportunity to found a radical Catholic sect. He managed to do this without outright breaking with the Church by convincing a conservative papal legate from Vietnam to ordain loyal bishops for him.[4] Interestingly, this priest was Ngô Đình Thục, older brother of Ngô Đình Diệm, who was president of South Vietnam before being assassinated with US assistance. Thuc was a notable crazy person, and went on later to denounce John Paul II as a false pope for, among other things, "modernism" and holding to the "adoration of man."[5] After consecrating priests for the Palmarians without papal authority, Thuc was excommunicated, although he was later forgiven and then excommunicated again for the exact same reason not even ten years later.[6]

In 1978, the death of Pope Paul VI created an unmissable opportunity for Domínguez. He claimed to have received a vision from Jesus ordering him to declare himself "Pope Gregory XVII the Very Great",[7] and he announced that his little sect was, actually, the one true Catholic Church.[1] As pope, Domínguez set about canonizing notable historical bad guys like Francisco Franco and Christopher Columbus as Catholic saints, without the real papacy's blessings.[8] He used donations grifted from his followers to purchase land and build the Palmarian cult compound.

The Palmarians enforce rigid rules for their membership, most damagingly for the children. Cultists are kept apart from family members who are not part of the sect, and children are not permitted to even speak to non-cult schoolmates.[1] Meanwhile, Domínguez strove to present himself as a holy figure who held spiritual truth and denounced all non-Palmarians as irredeemably evil.[3] There have also long been accusations against Palmarian clergy of sexual abuse.[9] 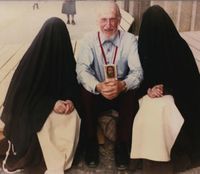 Palmarian cult members in the 1980s. The two people under the black veils are women.

The Spanish support group for ex-cult members obtained a (likely incomplete) list of rules that the cult's leaders enforce on their followers.[10] Some particularly egregious/ridiculous examples:

The ex-pope and his girlfriend.

The defection of one of the Palmarian cult's former popes cast light on just how much of the organization is built on financial fraud. Pope Gregorio XVIII, who fled the cult in 2016 to be with his girlfriend (no, really[11]) spilled the beans on how the cult receives about $2 million (!) in donations every year from deluded faithful who live internationally.[12] Using a number of excuses, including conspiracies about the Bilderberg group, the cult has kept its finances locked down in secrecy.[12] Allegedly, and almost certainly, the cult has engaged in tax fraud and other financial schemes in order to keep the money flowing.