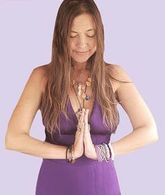 Love Has Won is a New Age cult, based primarily in Crestone, Colorado. For 15 years, its central figure was Amy Carlson (1975[1]–2021[note 1]), purported to be the 534th incarnation of "Mother God," a divine being on a multibillion-year mission to save humanity.[3] The group has a substantial media presence with daily "Energy Update" live streams, a sketchy website,[note 2] and a lifestyle brand peddling various alternative medicines and objects of woo.

Their headquarters in Crestone was Amy Carlson's residence, shared with her core group of devotees, referred to as "the First Contact Ground Crew Team" internally. Vice describes the headquarters as "a chaotic house" where members "are required to leave their old lives behind and instead concentrate on bringing in money and pandering to Carlson’s every need."[3]

Mother God is the supreme deity of Love Has Won, but not the only deity. Amy Carlson claimed to be her current avatar, sent to Earth to fight "the Cabal" and bring about spiritual ascension of its inhabitants. Other deities include:[4]

The deities of Love Has Won constitute "the Galactic Federation of Light Team" and Mother God's "surgical team." The "etheric surgeries" they supposedly assisted Carlson with are essentially psychic surgeries performed via a phone/Skype call to treat spiritual ailments that most people supposedly have thanks to "the Cabal".[8]

Etheric surgeries are one of a few services one can get from Carlson by booking a phone/Skype session for upwards of $70 an hour, which range from "quantum numerology" to "overcoming addiction" (knockoff-psychotherapy) to "twin flame" (for finding one's soulmate).

Love Has Won's basic beliefs are outlined by their Universal Laws and various Divine Decrees.[9] The Universal Laws aren't particularly original, with many recognizably similar to other New Age and spiritual movements. As these are extensive, here are the highlights that can be translated into plain language:

There are two sets of Decrees. The New Earth Decrees call for the dissolution of ego to stop all conflict, and for all of humanity to be led and partnered up by Mother God. The Second Set of Divine Decrees call for a spontaneous end to war, religion, corporations, and greed, as well as demanding proof of the various conspiracy theories that Love Has Won claims are true (see below).

Love Has Won is known to support many conspiracy theories, sometimes with their own caveats.

Love Has Won has gained considerable media attention from the reckless and abusive behavior of Amy Carlson, much in contrast with the cult's calls for world peace, spreading love, etc. Vice's documentary extensively documented her screaming abuse at her followers for disobedience. She's also seen referring to non-followers as "spiritual ego whores".[3] Despite other members claiming that Love Has Won is entirely drug-free, Carlson reportedly drank copious amounts of vodka every night,[3] enough to make her "lose her cognitive abilities" and coordination.[16] Her followers explained this away by claiming she consumed alcohol as a "natural painkiller."[3]

Carlson's body was found in April 2021; she died at the age of 45.[16] It's unknown what Love Has Won will do to replace her; they neglected to announce her death, and the news only broke when Carlson's body was found in her home by local law enforcement on April 29th. She had been "dead for weeks"[16] when found, and seven members were arrested for abuse of a corpse and child abuse that day:[17][18]

Isn't it embarrassing when one of your cult's gods pickles herself on colloidal silver and vodka,[3][19] then dies and gets lit up like a Christmas tree…[2] and another one (or more) gets arrested for corpse and child abuse?[18]