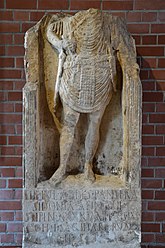 Tiberius Iulius Abdes Pantera (c. 22 BCE – CE 40) was a Roman soldier from Sidon. If that was his only claim to fame, nobody would care.

However, according to some non-mainstream historians, Pantera may possibly have been the father of Jesus. The "Jesus son of Pantera" hypothesis has been promoted by James Tabor, who defends it primarily on textual grounds.[1]

Analysis of the name[edit]

The name "Pantera" is Greek, was probably his last name, and means "panther". The names "Tiberius Iulius" were probably given to him as a former slave when he obtained Roman citizenship through serving in the army. The name "Abdes" means "servant of God" and suggests a Semitic or Jewish background, and possibly a Jewish faith.

Pantera would have been a young Roman soldier, located in Judaea, during the time of Jesus' conception.[1] Certainly Roman soldiers would have been tempted to have sexual relations with local women with or without consent. They were men in the prime of life and were forbidden to marry until they were forty. Since Roman soldiers were tried by other soldiers, they may have been able to get away with serious crimes if those who tried them were sympathetic.

Pantera served in the army for 40 years under Tiberius. On discharge, he would have gotten citizenship from the Emperor and may have added the Emperor’s name to his own. Tiberius ruled from 14 CE to 37 CE. Pantera’s 40 years of service would therefore have started between 27 BCE and 4 BCE. As Pantera would probably have been about 18 when he enlisted, it means he was likely born between 45 BCE and 22 BCE. He could have been as old as 39 or as young as 16 at the time of Jesus’ conception in the summer of 6 BCE.[2]


Pantera's tombstone tell us that he was from Sidonia, now called Sidon, which is slightly north of Judaea, which makes it more feasible for him to have had sex with Mary. Pantera's tombstone further tells us that he was a member of the First Cohort of Archers, which were originally based in Palestine. In 6 CE they moved to Dalmatia, and to the Rhine in 9 CE.[2] Since Jesus' conception occurred roughly around 6 BCE, he was in the right region at the right time, though that doesn't prove anything.

A Greek philosopher named Celsus living around the second century of the Christian era recorded a notable rumor. We only know Celsus' claim from Origen's reply. Origen wrote:[4][5]

Let us return, however, to the words put into the mouth of the Jew, where 'the mother of Jesus' is described as having been 'turned out by the carpenter who was betrothed to her, as she had been convicted of adultery and had a child by a certain soldier named Panthera'.

Another translation (and fuller quote) of Origen has him quoting Celsus as saying:[6]

Jesus had come from a village in Judea, and was the son of a poor Jewess who gained her living by the work of her own hands. His mother had been turned out of doors by her husband, who was a carpenter by trade, on being convicted of adultery [with a soldier named Panthéra (i.32)]. Being thus driven away by her husband, and wandering about in disgrace, she gave birth to Jesus, a bastard. Jesus, on account of his poverty, was hired out to go to Egypt. While there he acquired certain (magical) powers which Egyptians pride themselves on possessing. He returned home highly elated at possessing these powers, and on the strength of them gave himself out to be a god. 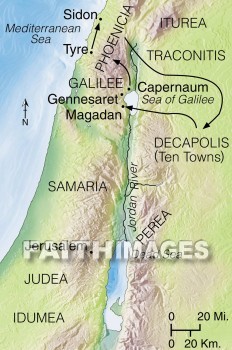 A map of Tyre, Sidon, and the Decapolis, and the route Jesus traveled through them.

The Bible, if accepted as true, and if read just right, is believed, by some, to offer support of the "Jesus son of Pantera" theory.

When Mary became pregnant with Jesus, she was engaged to Joseph, but not officially married to him. Joseph wanted to call off the marriage after he found out about the pregnancy, suggesting that he was suspicious of her. Matthew 1:18-19 states:

Now the birth of Jesus Christ was on this wise: When as his mother Mary was espoused to Joseph, before they came together, she was found with child of the Holy Ghost. Then Joseph her husband, being a just man, and not willing to make her a publick example, was minded to put her away privily.

So it seemes, Joseph was clearly informed about the circumstances. The next verse, Matthew 1:20-21, 24, states:

But while he thought on these things, behold, the angel of the LORD appeared unto him in a dream, saying, Joseph, thou son of David, fear not to take unto thee Mary thy wife: for that which is conceived in her is of the Holy Ghost. And she shall bring forth a son, and thou shalt call his name JESUS: for he shall save his people from their sins. .... Then Joseph being raised from sleep, did as the angel of the Lord had bidden him, and took unto him his wife:

If we accept the Bible as being true, there's no way to read Pantera into Joseph's reaction.

Luke 1:36-56 says that Mary spent three months of her pregnancy at the house of a relative named Elizabeth. It has been suggested that she made this visit to avoid the disgrace she would have faced in her own community.[7]

This is pretty weak, given that an angel visited Mary and told her about Elizabeth's similarly miraculous conception of John the Baptist, because she was of old age. If you've just been visited by a messenger of God and told someone else has had a similar thing happen to them, you might well seek them out to, you know, talk about it. Whether or not they may have talked about it is unclear, and not covered in the scripture of the Bible. It can however not be eliminated as having a high probability, because they were close related and having seemingly, steady social relations.[8]

And from thence he [Jesus] arose, and went into the borders of Tyre and Sidon, and entered into an house, and would have no man know it: but he could not be hid.

Here takes place the telling of a turning point in Jesus' mission to also include gentiles (non-jews). As a Syrophenician woman asks for a miracle regarding her spirit-possessed son in Mark 7:27:

But Jesus said unto her, Let the children first be filled: for it is not meet to take the children's bread, and to cast it unto the dogs.

However, Jesus rewards the woman for her faith in him and grants her, her son's health. Mark 7:31 says:

And again, departing from the coasts of Tyre and Sidon, he [Jesus] came unto the sea of Galilee, through the midst of the coasts of Decapolis.

To walk from Tyre to Sidon is about 20 miles, which wouldn't have been a small trip in Jesus' lifetime. Yet Jesus did it twice. James Tabor advances the hypothesis that Jesus went to Sidon to say hello to his biological father, and tried to do so secretly.[1]

This would have occurred approximately 25 CE (if we accept that Jesus was about 30 and was born in about 6 BCE). However, the First Cohort of Archers, to which Pantera belonged, had moved to Dalmatia (in Germany) in 6 AD, making visiting him in Israel rather difficult. Furthermore, it makes just as much sense to say that Jesus was doing his Jesus thing and preaching, but didn't want any more run-ins with the critical, skeptical Pharisees. His trip to Sidon did not go unnoticed, and by the verbal encounter with the Syrophenician woman—if true—suggests that Jesus was visiting people of jewish origins. Hardly would he call a non jew to be a dog, if he was indeed visiting his alleged roman father.

There is one Roman encounter that stands out among the stories in the Bible, and that is the one where a Roman centurion

asks Jesus for a miracle. The story unveils in Capernaum where Jesus without hesitation accepts the request to heal his servant who lies with 'the palsy'. Now this Roman is no Jew but surely he holds a certain position. But it can be argued that the reason why Jesus immediately accepts the request is because he already knows this centurion.[9]

Before the 1900s, scholars had hypothesized that the name "Pantera" was an uncommon or even fabricated name. However, Adolf Deissmann showed with certainty that it was a common name at the time, and that it was especially common among Roman soldiers.[1][10] Pantera is not an unusual name, and its use goes back at least to the 2nd century.[11] This certainly makes it harder to believe that this Pantera was the father of Jesus, even if a Pantera was.

Celsus had reason to slander[edit]

Celsus was extremely anti-Christian,[12][13][14] and may have fabricated the story to slander Jesus.

Some have proposed that the choice of the name "Pantera" may have been a pun on parthenos, the Greek word for virgin.[15] Admittedly, the words Pantera and parthenos do not come from the same linguistic roots. Another point against this idea is that Christian church fathers such as John of Damascus and Ephiphanius of Salamis took the name seriously, as a name for one of Jesus' ancestors (or a nickname for Jacob, the father of Joseph) according to Matthew's genealogy.[16] Even if false, the rumor shows one fact clearly: right from the start, non-Christians made fun of Jesus and of Christianity.