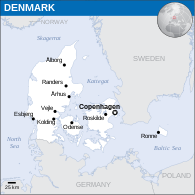 Denmark is a Scandinavian country somewhere in Europe, marked mostly by wiki-wars and gloom, happiness.[1][2][3][4][5] While Denmark (like any piece of landmass covered with a flag) has many problems, there are many happy Danes. Their ex-Prime Minister was notably hawt.[6]

The Kingdom of Denmark contains two autonomous territories: Greenland and the Faroe Islands. In mid-1600s the Danish took a few islands in the Caribbean from the Dutch and hung onto them until selling them off to the United States in 1917 (they had tried to do this about 50 years earlier, but it fell through for a variety of reasons), thereby making them into the United States Virgin Islands.

Denmark's supporters have provided evidence that despite not being subject to laissez-faire economic policies it is the happiest country in the world,[7] and also the best country in which to do business.[8] Denmark joined the European Union, then the European Economic Community, in 1973.

Denmark has a state church, the Lutheran Church of Denmark, and most Danes are still nominally Lutheran because Danish law requires them to opt out rather than opt in. However, the country's laws and population are largely secular, and less then 10% of the population attends any church, temple, or mosque regularly. A 2005 Eurostat poll suggests that 19% of Danes self-identify as atheists.[9]

Islam is the second-largest religion (which is not saying much as Muslims constitute only 2% of the population) due to immigration since the 1960s (initially, mainly Turkish and to a lesser extent Pakistani migrant workers, later supplemented by various Muslim refugees). This has caused a host of troubles for the secular, yet mono-cultural nation, though Denmark still has one of the lowest proportion of foreigners in Europe, and violent clashes between immigrants and (other) Danes have been relatively minor. 20% are happy to vote for a xenophobic right wing populist party[10] which, along with immigrant bashing, thinks it can ignore the Schengen Agreement

and reintroduce border controls - various members have in the past touted such initiatives as wanting to abolish the teaching of philosophy, to shut "commie" universities and to get Schleswig

back from Germany, because hey, irredentism.

Nonetheless, Denmark and Sweden demonstrate that religion is likely not critical to a healthy society.[11][12]

Problems ensued after a small, local Danish newspaper considered, solicited and printed some cartoons that Muslims found offensive. However, they did not immediately cause any trouble. A number of months later some Muslim Imams, looking to stir up trouble, took the 8 cartoons, added what would be the four most offensive images, and distributed the cartoons in Muslim countries. The backlash then led to death threats and even to attempted murder. 100 people worldwide are known to have died due to the trouble.[13]