The site appears to be mainly a platform for Peter Brimelow's anti-immigration views, which veer frequently into playing footsie with overt white nationalism; the other topics are window dressing. Brimelow has admitted that VDARE does publish people who are white nationalists.[3] VDARE has carried articles by fringe "academics" Jared Taylor, J. Philippe Rushton, Edward Dutton and Kevin MacDonald, who more than just flirt with overt "scientific" racism (or "racial realism", as they like to call it). It also carried articles by Sam Francis

VDARE takes its name from Virginia Dare, purportedly the first "white" child born in the New World. They apparently don't realize that this makes her the original "anchor baby."[note 1] 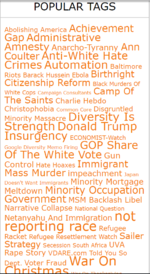 VDARE's popular tags section pretty much says it all

VDARE seems to want to take credit for popularizing the idea of a War on Christmas.[4]

Hilariously, a few of their writers seem to be fish out of water there, writing about civil liberties advocacy, opposition to war and globalization, and critiques of government power, oblivious to the mainly immigration-related and white supremacist tilt of the site. Of course, this fits with the site's paleoconservatism, as that philosophy is also opposed to militarism and globalization, albeit from an isolationist, "America First" view rather than a humanitarian one. Paul Craig Roberts is an obvious example, although VDARE is just running his syndicated columns, meaning there is no reason to ever read VDARE just to cherry pick the occasional good stuff since it can be read elsewhere.

The site is, however, a really good fit for Malkin's wingnuttery. In a great example of tokenism, the site hand-waves accusations of racism by touting the fact that Malkin is a Filipina, as well as the minority status of other contributors such as the half-Korean, half-Jewish Marcus Epstein and the Cuban-born George Borjas.[5] It helps to overlook the facts that Malkin wrote a book-length defense of racial profiling and Japanese American internment during World War II, and that Epstein karate chopped a black woman while muttering "nigger."[6] But look, they've got non-white employees, so they can't possibly be racist! Adding to that, VDARE itself claims that Cubans are really "white" unlike most Hispanics, meaning they don't have any employees that are either a) black or b) that they themselves would consider Hispanic.

In May, 2020 a Facebook group connected to VDARE was suspended.[7]

VDARE was banned by YouTube in August 2020 for violating its hate speech policies.[8]

In June 2020, the domain registrar Network Solutions announced that they plan to terminate the account for VDARE for promoting white nationalist and anti-immigration views.[9] As of August 2020 the website has not been delisted.