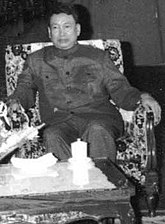 Chillaxing after an eventful day at the murder pits.

Pol Pot (May 19, 1925–April 15, 1998), born Saloth Sâr, was the former batshit dictator of Cambodia who, in the name of trying to roll back time to the Year Zero (seriously) and return to a state of agrarian society, systematically had intellectuals, middle class people, and anyone who opposed him murdered and the rest emptied out of the cities into collective farms to work 18 hours a day, where many more starved to death or were executed.[2]

He was known in the Khmer Communist Party as "brother number one" and adopted the name Pol Pot in 1970, derived from the French phrase Politique potentielle (Potential Politics) - a form of extremist Communism he believed in and the name the Chinese supposedly gave to him. Alternatively, "Pol" may have referred to the Pol tribe who were regarded as "royal slaves" and "Pot" was merely a euphonic monosyllable that he liked the sound of. Pol Pot's murderous Khmer Rouge actually was funded by Mao Zedong. From 1970 to 1974, Chinese assistance rendered to the Khmer Rouge was valued at 316 million yuan. In the same period, the value of Chinese assistance to North Vietnam was 5,041 million yuan.[3]

In any case, Pol Pot also ordered mass executions of Vietnamese, Thai, Chinese, Americans, Christians, Buddhists, Jews and Muslims along with anyone suspected of Western connections, including the past leadership of Cambodia, and even some party members. Anyone considered an intellectual, including teachers, doctors, business leaders, nurses, journalists, students, authors, lawyers and even people who wore glasses or spoke more than 1 language were also murdered. Pol Pot's catchphrase was "to keep you is no benefit, to destroy you is no loss." His victims were often forced at gunpoint to dig their own graves which are now known as "the Killing Fields." Forms of livelihood that were difficult to centralize were also destroyed, including hospitals, medicine and trees. Just about the only ones who had a good time under Pol Pot were the fish as fishing was banned under pain of death. Pol Pot's stated goal was to reduce the population of Cambodia to one million.[4] You get the idea.

Ironically, given his hatred of teachers and intellectuals, before entering politics, Pol Pot was a teacher of history and geography, which probably proves right everything you thought you knew about history and geography teachers, as well as an electrical engineering student during his time studying abroad in France.[5] His terrible academic record was actually an asset for his political ambitions, given that the revolutionaries in Cambodia railed against any and all things "bourgeois".

Pol Pot's three-year reign came to an abrupt end when neighboring Vietnam, also ruled by a Communist government that had been allied with Pol Pot's Khmer Rouge during the Vietnam War, finally invaded to depose Pol Pot in a reaction to previous Cambodian military attacks against Vietnam. Pol Pot's Khmer Rouge then took to the hills to wage guerrilla warfare against the Vietnam-backed regime. As politics makes for strange bedfellows, Pol Pot was allied with a couple of liberal democratic groups also waging guerrilla warfare against the Communist government, along with the US government (who supported them in resentment against Vietnam, despite earlier denouncing the atrocities). As the regime which displaced the Khmer Rouge was a puppet of Vietnam and quickly descended into a factional disaster of its own, the Khmer Rouge had the Cambodian seat at the UN for over a decade at the US's insistence and with tacit support from the other permanent security council members while in exile. President Clinton finally put a stop to it when he came into office, in large part due to the unique political climate after the Soviet Union disbanded. Pol Pot's second-in-command Ta Mok overthrew Pol Pot and placed him under house arrest in 1997 and took control of the floundering Khmer Rouge.[6]

Pol Pot died the following year, supposedly of heart failure. It is said that valium and chloroquine contributed to his death,[7] and he did get remarkably fat in his later years, although he was due to face trial by an international tribunal so it may be possible that he topped himself. A reporter present asked if he regretted anything. Pol Pot looked confused, saying: "No. I want you to know. Everything I did, I did for my country." Make of it what you will. Cambodia became democratic in the absolute loosest sense and still struggles to recover from the Khmer Rouge era, with almost half the country suffering from PTSD and parents passing it onto their children, and there are ongoing efforts to prosecute the surviving atrocity perpetrators.