The Power Balance bracelet is another in a long line of science woo scams. In late 2010 and early 2011, they received significant amounts of media coverage due to players wearing the bands during the Ashes cricket.[1]

According to their web site,

The benefits, again from their web site are:

Although there is a noticeable lack of supporting evidence of any kind, let alone peer-reviewed papers, they hark to the mystical east (where else):

See the main article on this topic: Testimonial

On opening their web site (UK version), the first name you see is Rubens Barichello. For a device that relies strongly on testimonials, though, there are very few actually present; the Barichello bit is a claim that he has been seen wearing a bracelet, so not much of a testimonial there. 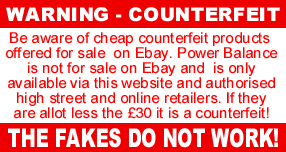 Bearing in mind that it's a rubber band with a piece of "hologram" foil embedded, they come in at a very reasonable £25 for the UK version and $60 for the US version. Whether they're working from a very old exchange rate or they reckon 'murkins are easier to part from their cash is debatable.

Power Balance LLC has apparently acquired the naming rights for the "Arco Arena" in Sacramento:

"… a credible source told Sactown Royalty that the Kings have agreed in principle to a five-year deal with Power Balance LLC to rename the arena the Power Balance Pavilion. This is not a joke."[2]

A 2010 test by the Independent Investigations Group found no difference between Power Balance and a control bracelet for either an obstacle course or for flexibility.[5]

In 2010, the Australian Competition and Consumer Commission found that "[The] claims made by Power Balance were not supported by any credible scientific evidence and therefore Power Balance has admitted that it has engaged in misleading and deceptive conduct in breach of s 52 of the Trade Practices Act 1974."[6] While the refund policy that they were forced to adopt looks like a strap slap on the wrist, the admission of misleading conduct that they were forced to publish was picked up by non-Australian media[7] and may cause them more trouble.