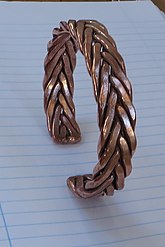 Medical benefits: mild exercise every time you lift your wrist

A copper bracelet is a piece of jewelry made from copper worn around the wrist. Some people think they look nice. They are also promoted as a cure for certain disorders, most prominently osteoarthritis. However there is no evidence that they work, and scientific studies have shown negative results.

Copper insoles are also worn by some people, for a similar reason.[1] There seems even less study of them and less evidence, but if bracelets don't work there is no reason to assume insoles do either.

In 2005, Stewart J. Richmond and others conducted a study in 45 people in Yorkshire, England, which compared various magnetic bracelets with copper bracelets and found "magnetic and copper bracelets are generally ineffective for managing pain". Patients wearing the magnetic device reported a slight reduction in pain compared to the copper bracelet, although the researchers explained reported benefits were probably due to "non-specific placebo effects. However such devices have no major adverse effects and may provide hope."[3]

A slightly larger study with 70 patients was later conducted by Richmond and others and published in PLOS ONE in 2013, but it again found no benefit in any device.[4] The later study was praised by Eric Matteson, chair of rheumatology at Mayo Clinic, and Robin Miller, an integrative medicine physician, both of whom suggested the study offered convincing evidence of their ineffectiveness. Matteson said, "As the authors state, the devices hold allure because they are safe and inexpensive, but as pointed out, the risk is that patients might use them in lieu of effective treatment, rather than as an 'add on.'"[5]

Some earlier studies seemed to show a benefit for copper and zinc without offering any obvious mechanism of how they could alleviate arthritis.[6] Studies in the early 1980s looked at whether copper could be absorbed through the skin with certain lipophilic molecules such as salicylates, but this doesn't relate directly to copper bracelets, and if topical application of copper compounds did help arthritis, there would be many better methods of application than via bangle.[7]

The copper in the bracelet can’t be absorbed into your joint in any way and there’s no evidence that arthritis is caused by shortage of copper in your body.

There’s no current research supporting the use of copper bracelets, but they’re perfectly safe to use.[8]

There is currently no totally effective medical remedy for joint pain or arthritis, and therefore many experts say that copper bracelets (being comparatively cheap) do no harm and may provide a placebo effect or help patients feel in control of their health.[2] A cheap bangle will be as effective as an expensive one sold with fancy health claims on a dodgy website, so don't get ripped off. And they should not be used as a substitute for proper evidence-based medical treatment.

Copper is necessary for your body to function, being involved in various enzymes and biological processes including the formation of red blood cells, but it is available in many foods including shellfish, nuts, seeds, whole grains, and chocolate. Certain people may be at risk of copper deficiency, mainly those with coeliac disease who avoid foods containing gluten, and those taking zinc supplements. On the other hand, excessive copper (sometimes due to water sitting in copper pipes) can cause liver damage and "abdominal pain, cramps, nausea, diarrhea, and vomiting". So if you're worried about your copper levels, you should be able to get enough if you eat healthily and maybe have some chocolate.[9] But a bracelet is a really poor way of absorbing copper.[8]

Apparently, in 1939 Werner Hangarter, a German doctor, noticed that Finnish copper miners didn't get arthritis until after they stopped work, and therefore he concluded that the copper was preventing arthritis. But while copper has various biological functions he wasn't able to explain why copper-mining or bracelets would do anything.[1] A cynic might suggest that workers stopped working when they got arthritis, or developed arthritis in old age after retiring.

On the other hand, the woo community claim all kinds of benefits. Brian Christian, who has no medical training but a degree in communications and "fifteen years of sales experience" uses all his skills to suggest copper bracelets can:[10]

These claims can be divided into two categories. Some do relate modestly to the biological effect of copper in the body, in which case see the section above about how to ensure you get enough copper in your diet, and don't rely on a bracelet as a substitute for healthy eating. But most claims are nonsense, with no medical evidence, and should be rejected outright.

Copper bracelets can be attractive, but to keep them from going green due to oxidation one must protect them. But anything that prevents the oxidation of copper in a bracelet would keep the benefits of copper seeping into one's body from happening, anyway.