From RationalWiki
(Redirected from Acupressure)
Jump to: navigation, search

Acupuncture is a traditional Chinese therapy based on sticking needles into the dermis at presumptively precise points along 'meridians'. Acupuncture is often described as "gateway woo"[1] because of the increasing number of scientists and medical centers accepting it as respectable treatment.

While many doctors don't believe in chi or meridians, it is widely believed that acupuncture is more effective than randomly stabbing someone with needles while telling them it helps, despite a serious lack of quality randomized clinical trials (RCTs) and a nearly completely-unknown mechanism of action.[2] This belief is apparently because needles have less of a "magic" vibe than other forms of woo. Despite spending considerable sums of money, acupuncture researchers have yet to show consistent, statistically significant, and relevant effects in proper clinical trials.[3] Although a few small-sample (case, or case series) studies including an n=57 randomized placebo-controlled study from 2009 suggest acupuncture can increase fertility in infertile patients,[4] as later editorials and papers asserted, these results, "should be considered preliminary awaiting further supporting evidence,"[5] and, "[t]he current evidence showing that acupuncture might improve poor semen quality is insufficient because of the small number of studies, inadequacy of procedures and/or insufficient information for semen analysis, high levels of heterogeneity, high risk of bias, and poor quality of reporting. Further large, well-designed RCTs are required."[6] 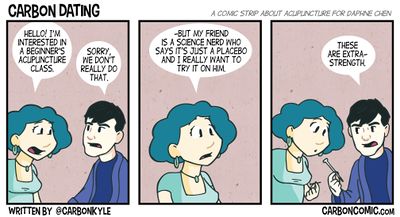 Acupuncture can relieve anger, too.

Acupuncture's theoretical basis is that health and sickness are caused by the good or bad flow of chi through the body, in particular along the twelve major meridians of the body (though some authorities list fourteen or even more) which run from head to toe along the body, and which are associated with the bladder, gallbladder, heart, large intestine, small intestine, kidneys, liver, lungs, spleen, stomach, pericardium, and "triple heater" (三焦) also known as "triple burner" in English. "Triple heater" is by necessity a literal translation from the Chinese: as there is no such organ, there is no correct medical term for it.[note 1]

The acupuncturist treats the ailments of these various parts by inserting needles at points lying on these meridians, known simply as "acupuncture points" and manipulating the needles to increase or decrease the flow of chi along that meridian.

Variants on acupuncture include auricular acupuncture, which involves sticking needles into particular parts of the outer ear, which supposedly correspond to different body parts (essentially reflexology with ears instead of feet); electroacupuncture, in which the needle carries a small electric current; and moxibustion, in which moxa (the plant commonly known as mugwort, Artemisia vulgaris) is set smouldering on the appropriate acupuncture point. Acupuncture can also be used to perform bloodletting.[7] This is supposed to be good for a long list of unrelated diseases. Chinese bloodletting is banned in California.[8]

Unlike many remedies which appeal to the New Age, acupuncture is genuinely pre-scientific and genuinely Asian. The earliest surviving text dealing with acupuncture is the Chinese text The Yellow Emperor's Classic of Internal Medicine, dating from rather uncertain origins ranging from 320 BCE to 220 CE.[9][10]:69 The transmission of acupuncture to Korea and Japan in the 6th century CE[11] though shows that it was in use well before any scientific understanding of disease, including germ theory, cell theory, and basic biology such as neurology. According to one myth, acupuncture was invented by the Chinese god Shennong sometime around 3000 BCE.[12]:71-72,193 Possible evidence of even earlier development of acupuncture exists in the form of neolithic period bone needles.[10]:72-73 More convincing physical evidence in the form of gold needles came from the tomb of prince Liu Shêng (–113 BCE).[10]:73-74

The origin of moxibustion is likely more recent than acupuncture, with the first possible references in lost books of the Han dynasty (202 BCE–220 CE), and the oldest definitive reference in the Three Kingdoms period (220–280 CE).[10]:175-176 Nonetheless, moxibustion and acupuncutre are closely intertwined, not just because of shared use of meridians but because of historical texts:

With the introduction of Western medical ideas, acupuncture lost ground in China from the 17th century onwards. It regained some of its prestige, starting with Mao Zedong and the Chinese Communist Party advocating Traditional Chinese Medicine following the end of the Chinese Civil War. The publication in 1951 of The New Acupuncture by Zhu Lian[13] was central to repopularizing acupuncture.[14]:18

Although the basics of acupuncture have remained the same since ancient times, the system has suffered the inevitable mutations and accretions: the original system, for example, had as many as 365 acupuncture points, with classical texts (from 1600 CE and earlier) ranging from 295-667 named and bilateral points.[10]:100 Notably, moxibustion has a mostly overlapping set of points but also includes different points.[10]:172-174 Modern acupuncture systems catalog as many as 2000 points.[15] There is no science to support even one point, and inventing more of them just gets more patients to pay money.

Your tax dollars at work doing nothing — or possibly spreading disease.

Sticking needles into people can cause the release into the bloodstream of endorphins and natural steroids such as cortisol. The medical version of this is called intramuscular stimulation and is of some use in the management of chronic pain. Acupuncture, to the extent it works, seems to do so in this manner. The pain relief from acupuncture seems to be mediated solely through the release of endorphins, as any perceived analgesic effect is reduced or eliminated when the patient has been pretreated with an opioid antagonist such as naloxone.[16] However, the few supposed studies that show efficacy have been criticized for poor design, poor analysis and poor results.[17] In fact, if acupuncture were held to the same standards as all other medications and drugs, the poor quality of the studies would have prevented it from ever being approved for use by the FDA.[note 2]

As to the wider claims of acupuncturists, it seems on the face of it unlikely, given the unscientific basis of their claims, that they can have much effect on a patient's physiology by manipulating the flow of a non-existent substance around imaginary meridians. The James Randi Educational Foundation noted that in studies using "no needles vs needles," the methodology of the study is an important consideration.[19]

However, a recent study using an MRI to view brain activity during an acupuncture session found that specific acupuncture points have distinct effects on cerebral activity in specific areas that are not otherwise predictable anatomically.[20]

The biggest publicity generator for TCM in the West was in the early 1970s with acupuncture analgesia allegedly used in surgery, which was publicized by James Reston, a New York Times reporter who accompanied then-Secretary of State Henry Kissinger to China in 1971, in preparation for President Richard Nixon's visit in 1972. Reston had an emergency appendectomy while in China using conventional anesthesia,[14]:138 and received post-surgical acupuncture analgesia, which he described as causing diversionary pain.[21] Acupuncture analgesia has been portrayed elsewhere as occurring during surgery,[14]:138-140 but this has largely been debunked: when acupuncture has been used during surgery, it has been used in addition to chemical sedatives.[22][23][24][25]

It is noticeable that acupuncturists tend chiefly to advertise their abilities to treat precisely those ailments which are chronic but intermittently better or worse (headaches, acne), or which often have a strong psychosomatic element (impotence, asthma), or which are guaranteed to clear up rapidly anyway (the common cold), and are therefore profiting from the placebo effect and regression to the mean.[note 3]

It has also been found that far from curing disease, acupuncture has been a transmission agent for hepatitis C, Methicillin-resistant Staphylococcus aureus and acupuncture mycobacteriosis.[26] In one prospective study of 190,924 acupuncture patients, the rate of "serious adverse events (death, organ trauma or hospital admission)" was found to be 0.024%.[27] In another prospective study of 229,230 patients, the rate of "adverse events requiring specific treatment" was found to be 2.2%.[27]

Unfortunately, almost no reporting mechanism exists for acupuncture, and so the true harms are likely grossly underestimated.[29]

Acupressure is acupuncture without the needles.

Acupressure is part of the Western bundle of hypotheses and practices known as traditional Chinese medicine. You press on acupuncture pressure points to affect the meridian system and bring about relief by rebalancing yin, yang and qi. Apparently.

Considering the needles are the one bit of acupuncture that appears to do anything at all, with the rest of the theory being woo, acupressure is, unsurprisingly, not much good. Studies show[30] possible effects, such as interaction with the body's pain reduction systems, but at a level that is not statistically significant. Studies are ongoing.