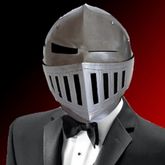 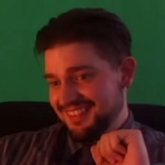 Gregory Fluhrer (1984–)[note 1][1] better known as Armoured Skeptic[note 2] (also Sir Skeptalot or AJ),[note 3] is an atheist YouTuber who considers himself a critic of religion, conspiracy theories, feminism / "SJWs" and ideological posturing in general. Many "skeptics" like the first two; somewhat fewer like the last two. His channel has supported an increasing amount of anti-SJW content.[2] He has at different points in his YouTube career considered himself to be a centrist, a liberal and a leftist.

As of January 2019, Fluhrer's main YouTube channel had over 492 thousand subscribers and 46 million views.[3] According to Patreon, he makes over $600 per video.[4]

As a child, Fluhrer was a member of a Messianic Jewish cult. Fluhrer describes the members as very nice people, but extremely deluded. After watching videos from thunderf00t, TheAmazingAtheist, and CultOfDusty, he questioned his beliefs and ended up becoming an atheist.[5][6]

The first atheist group that Fluhrer joined was an "Atheism+" group which promoted societal equality. For questioning their ideas, said group doxxed him and told his boss that he was a rapist, which nearly got him fired. Exact words: "I personally was called a rape apologist because I denied there was a rape culture and I was called a rapist because I denied that consensual drunk sex was in any way a form of rape." As a result, he considers Atheism+ to be almost a cult and created the Armoured Skeptic channel to combat Atheism+, but says that he has ultimately gone towards a more generally anti-bullshit channel.[5][6]

Fluhrer claims not to mind feminism but thinks it needs "evidence" to support its claims.[6]

The part that continues to fly over your head is that less women are in STEM fields... Women aren't allowed to join STEM you say? NO! They're actively encouraged to join, but somehow there are less women then[sic] men. Maybe... and bear with me... maybe they CHOSE not to join. Maybe women are flocking to gender studies and other useless degrees instead of getting into technology and engineering. Women are the reason the wage-gap exists, not the patriarchy. The point is, the fact that the gap exists does not mean something needs to be done about it. That's a non-sequitur and you know it. Feminism is about empowering women to choose. You're witnessing the result of their choice. Let[']s say we DO decide to fix this issue. Why not start at the ground up? Let's ensure there are as many women in sewage jobs as men, let[']s make sure there are as many women in mining jobs as men, let[']s ensure there are as many women driving big-rig trucks as men... then when the foundation is laid we will get more women into CEO positions.

Fluhrer's main body of work consists of rebuttals to creationist Christian arguments videos by his character (a guy in a modern suit and a knight helmet).

See the main article on this topic: Atheism+

The leaders [of Atheism+] gave voices to only a select few bloggers and celebrities. These bloggers would express opinions about what kind of problems exist in society and when commenters would ask questions about specifics or disagree with a single point in a blog, the commenters would get banned, bashed, berated, attacked, doxed, publicly shamed or called a rapist. It wouldn't matter if one were to agree with the over-all point of the blog, if one disagreed or questioned one small part than that person was basically Hitler to the rest of the community.

In 2019, amidst his typical schtick, Fluhrer uploaded a video called "History is a Lie?" where he claims that there was a global flood that was covered up and history prior to about 200 years ago is distorted. He continued this into a series, referring to it briefly as "The Armoured Conspiracy Files", and later "Tinfoil Helmet". There are four videos in this series:

These videos are almost entirely unsourced and cover a wide range of topics including but not limited to conehead skulls, Nikola Tesla, Tartaria, free energy, geopolymers, the Giza pyramids, Rapa Nui, and, of course, Atlantis.

Fluhrer synthesizes all this into his pseudohistorical theory: in ancient history, humans were ruled over by a race of cone-headed albino giants, the Denisovans. Atlantis was a global society of these giants, and they utilized the advanced technology that can be found in architecture around the world. All this was either forgotten or covered up after a global mud flood in the early 1800s.

It's unclear whether he's joking or not.

Fluhrer does not post any sources on his videos, which would be quite useful for proving that he's right or wrong on scientific issues. While he does sometimes highlight sections of webpages or videos that he thinks help prove this point, this is vastly less useful than the relevant links. In this way, he all too often relies on snark and assertion to make his points.

Fluhrer has been criticised for his overinflated ego and tendency to act as if he is an expert on many topics, although among entertainers this is a common enough failing. A notable example is when Fluhrer made a video about free speech in Canada.[19] He made numerous factual errors which made it obvious that he was either deliberately lying or had done barely any research. A pair of videos by YouTuber Logicked highlighted the factual inaccuracies,[20][21][22][23][24][25],[26] in Fluhrer's video. Possibly his most egregious error was when he said "C-16

is a Bill that prohibits people from misgendering or using the wrong pronouns when addressing people who identify as trans." The Bill said nothing about misgendering at all, but was instead about adding gender identity to the list of prohibited grounds of discrimination in the Canadian Human Rights Act.[27] In essence, it makes it illegal to deny services, employment or accommodation to individuals based on their gender identity.

Fluhrer is pissed at RationalWiki and questioned its name.[29][30][31][32] (At the time, RationalWiki's entry on him described him as a Gamergater and conspiracist.[33])

Fluhrer responded to Steve Shives's claim that he (Fluhrer) had cultivated a following "by making content that panders to racists, rape apologists, and misogynists" which Shives backed up with a link to this page. Fluhrer correctly noted that this page doesn't include the words "race, white, black, [or] supremacist" and didn't support any of these claims. He says:[34]

In fact, considering the nature and history of the site, I'm pretty impressed with how nice my page is. Even the criticisms about me are pretty reasonable. Ask June about her RationalWiki though. It is a shit show.