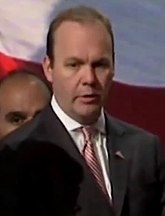 Richard "Rick" W. Gates III (1972–) is an American lobbyist and political consultant. Gates began his career as an intern for the lobbying firm Black, Manafort, Stone and Kelly, which was co-owned by Paul Manafort and Roger Stone.[1] Gates began working as an employee of the firm in 2006.[1] Gates' clients at the firm included Ukrainian president Viktor Yanukovych

On October 27, 2017 Gates was indicted along with Manafort by a federal grand jury under the direction of FBI special counsel Robert Mueller.[3] The charges against Gates are:[4][5]

On February 22, 2018, additional charges were filed against Manafort and Gates. The new charges against Gates included:[7]

On February 23, 2018, Gates plead guilty to one count each of conspiracy and lying to the FBI, and will cooperate with FBI special counsel Robert S. Mueller III.[8]

In a government sentencing memorandum against Alex van der Zwaan ("the lying Dutchman"[9]), who pleaded guilty to one count of making false statements in February 2018 in the FBI's Russian election interference investigation, it was revealed that Gates and "Person A" were directly communicating during September and October 2016 during the period when Gates was working for the Trump presidential campaign.[10][11] It was also revealed that Gates told van der Zwaan that Person A was a former Russian Intelligence Officer with the GRU.

Person A is believed to be a former Ukraine-based aide to Gates and former Trump campaign chairman Paul Manafort, named Konstantin Kilimnik.[11] Prior to his arrest, van der Zwaan was a London-based lawyer for the law firm Skadden, Arps, Slate, Meagher & Flom.

During the July 2018 trial of Manafort, Gates admitted to having embezzled money from Manafort…[12] it's true, there's no honor among thieves.