Rods, or Sky-Fish as they are also known, are UFOs (or maybe they are the aliens themselves? Who can say?) that are, surprisingly, in a rod shape. They range from several inches in length to over a foot, with membranes on the sides to assist in swimming through the air. Rods can travel at such a speed that they cannot be seen with the naked eye; however, much "good" footage has been taken of them (and we mean good in the loosest sense possible). They appear to be intelligent, dodging and weaving around obstacles and, in some cases, passing right through solid matter - which would obviate the need to dodge round, one would have thought. 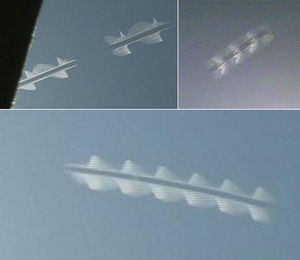 A collection of scary Rods

Jose Escamilla[1] was the first person to get a rod on tape (and also claimed that he was going to give the producers of Monster Hunt on the History Channel a "Monkey Spanking") and devoted his life to standing around with his camera pointed in the air trying to catch them on film, a technique known as "Sky Fishing". From the look of his website, Sky Fishing for Rods was not a particularly rewarding financial endeavour, but we thank him anyway for his dedication to hunting these creatures.

On the History Channel show MonsterQuest, rods were proven to simply be exactly what they look like; camera illusions caused by motion blur and shutter speed issues. At high speed, a moth was seen. At regular speed, it was a rod. Rods tend to be observed by people who forget that cameras do not work the same as eyes - among other things, there are quite a few things, particularly insects, that move rather faster than the frame rate of the typical camera, thus creating the rod-like appearance. Believers in rods still deny that they are camera illusions, but don't seem to be in the business of disproving this.

Amateur astronomer Bob DuHamel wrote a lengthy article, explaining exactly how the rods are "created;"[2] findings which have been echoed by other people examining the phenomenon.[3]