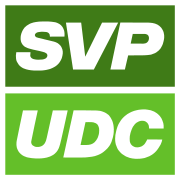 Official bilingual logo of this hateful party. The green doesn't symbolize ecofascism but the color of the money from corporate interests ruralist politics.

The Swiss People's Party (German: Schweizerische Volkspartei, SVP; French: Union démocratique du centre, UDC) is a nationalist political party in Switzerland disguised as a "conservative" populist party. Their party logo is a cutesy smiley sun but there's nothing sunny about this party. They won popularity in the 2003 election, and since then, have come under fire for their anti-immigration stances and racism.[1] They are largely responsible for numerous referenda that were blatantly xenophobic and racist, and they have worked to curtail immigration in Switzerland. Most notable of these referenda are a ban on minarets on mosques and an implementation of strict immigration quotas.[2]

While they insist that they are merely "anti-mass immigration", their posts are explicitly racist,[3] employing racist caricatures of immigrants.[4] These posters, often strongly resembling Nazi propaganda, also insinuate a Jewish conspiracy and depict people who need government assistance as worms crawling over an apple or rats tearing open a wallet.

This politics-related article is a stub.
You can help RationalWiki by expanding it.
Retrieved from "https://rationalwiki.org/w/index.php?title=Swiss_People%27s_Party&oldid=2296101"
Categories:
Hidden category: