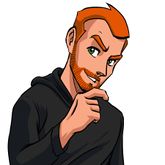 Dave Cullen, better known as Computing Forever, is an Irish YouTube talker and conspiracy theorist who holds reactionary and ultra-nationalist views.[1][2][3] His YouTube page had over 500 thousand subscribers, and more than 100 million views, before his channel was banned in January 2021.[4] Originally known as LACK78 on YouTube, he used to do reviews on tech products- hence the "Computing" in his username.[5] Unfortunately though, he has since devolved into a reactionary similar to Sargon Of Akkad, only ten times worse.

Cullen is against abortion, believing that a fetus should have rights equal to those of a living, breathing human- and that therefore, abortion amounts to murder. In his video discussing the topic, he attempted to refute the common argument that a fetus is not alive until it can feel pain, grow on its own, maintain homeostasis and do most of the other things which are required under the scientific definition of "life"

. He responds by saying, "my argument is to get here [a 30 week fetus], you have to start here [a zygote]". He still has yet to comment on whether he believes that sex should be banned, given that many fertilized zygotes die after insemination.[1]

Cullen is a strong supporter of Brexit, as he believes that immigrants and an overarching EU conspiracy want to take over Britain, because of fucking course he does.[6][7][8][9][10]

Cullen voted no in the Irish same-sex marriage referendum based on the scientifically debunked[11] idea that children need a mother and a father to develop properly. In the same video he fear-mongers about how gay marriage will lead to children being indoctrinated into liberal ideology. For this he cites a NaturalNews article about Safe Schools Coalition Australia (even though Australia hadn't legalised same-sex marriage at the time), giving out inappropriate resources to children. In reality the organisation did no such thing. The resources he talked about were given to teenagers while children were merely told gay and trans people existed and it was wrong to bully them for being that way.[12] He also links to a myriad of other far right sources to back up his slippery slope argument.[13]

Cullen, like many in the YouTube skeptosphere, is against feminism, believing that it will lead to Communism and eventually the end of civilization itself. His argument on how feminism will lead to communism is a standard use of the Chewbacca Defense (trying to overwhelm the viewer with as many nonsensical arguments as possible to the point where nobody could realistically refute them all in a short time span).[14] His argument on why feminism will lead to the end of civilization is based on an actual scientific study — performed on rats. Rats have a very rigid gender hierarchy that is different from humans',[15] and therefore, his ideas cannot be extrapolated properly from this experiment. Humans are a species which have had stable matriarchal,[16] patriarchal and gender-egalitarian societies.[17]

Cullen likes to talk about the evils of the mainstream media and how it is brainwashing us into being liberals and socialists![18][19] How refreshing. Aside from beating a dead horse

, the examples given for this are ridiculous. He paints MSNBC as liars due to them reporting on Trump cutting contraception requirements for insurance companies and rolling back equal pay protections, something that he actually did.[20][21]

Cullen praised Poland (you know, the country with the high amount of immigrants that went to Britain which triggered the entire Eurosceptic movement),[22] for the same reasons a lot of the alt-right do (not because of their economy or any actual indicators of a successful country, but because of their euroscepticism and opposition to refugees and immigrants). What they ignore is polls suggesting that most Polish people want their country to remain in the EU and to take in more refugees.[23][24]

Cullen's primary concerns seem to be with the left, making many videos criticising anything to the left of Mussolini[25] as well as making a show called #Regressive News (totally not this week in stupid, I swear).[26] He also has specific criticism of Socialism,[27] Marxism[3] as well as Communism.[14] Though, as with many reactionaries it is clear that Dave has absolutely no idea what he's talking about when it comes to these subjects.

His McCarthyism got to the point where he even accused fellow "sceptic" Sargon of being a Marxist (calling it Marxist Sargonism similar to that of Marxist Leninism, etc) as he is.....left wing? It made tenuous links between Sargon's social liberalism and Marxism, and after a severe amount of criticism[28][29][dead link] and Sargon's response,[30] he has now deleted the video and issued an apology.[31] The whole charade demonstrated how far down the right-wing rabbit hole Cullen seems to have fallen into, where even UKIP members like Sargon are Marxists.

On June 5, 2019, Cullen made a video describing how he abandoned atheism and returned to Christianity.[32] In the video, Cullen mentions that his views that are previously mentioned in this article are "incompatible" with atheism (if only that were the case; atheism is just the lack of belief in a god or gods). He then proceeded to spend the rest of the video attacking the left as an "explanation" as to why he became a Christian again.

On February 27, 2020, Cullen made his first video criticizing the public response to the coronavirus outbreak.[33] By November 2020, he had released over 60 videos related to the disease, questioning its severity, the use of face masks, governmental responses, future vaccines, "the agenda/narrative" and other predictable views. He is of the opinion that "this entire situation is the largest hoax in human history", connecting COVID-19 with agendas such as the limiting of population growth to mitigate the climate change hoax,[34] and an introduction of global food shortages to force people to change to lab-grown meat.[35] On multiple occasions Computing Forever has been mocked by dear ole Professor Stick pertaining to the subject of wearing masks.

Cullen doesn't like Angela Merkel and struggled to find any reason whatsoever for her reelection before concluding that the mainstream media brainwashed the German public.[36]

Cullen holds unfavorable views of Emmanuel Macron, believing that he is plotting to destroy France by letting immigrants into the country. What else would you expect based on this guy's videos?[37]

Cullen supports Trump (what sort of YouTube "sceptic" would he be if he didn't?),[38] referring to Trump's Presidential win as a "win for all of America" and claimed that Sam Harris had lost all perspective on Trump by not supporting him[39][40] (because Trump is really nuanced and you can't just hear all the batshit insane things he says and think putting him in the White House is not a good idea).

In a surprising stopped clock moment, Cullen argued for the legalization of marijuana.[41]

Cullen is opposed to MGTOW, saying it was becoming cult-like.[42] This got a predictable response from the very mature MGTOW community.[43]

Cullen advocated for net neutrality, and criticized Donald Trump for pushing against it.[44]

Cullen criticized Britain First as "genuinely far-right with extremely authoritarian rhetoric", and went through their policies which he considers hypocritical and "insane".[45]

Cullen must have read our Alt-right glossary, because he seems to be trying to use or dog-whistle every word in it:

He has had many interviews including: