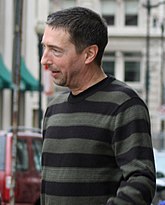 Ronald Prescott "Ron" Reagan (born 1958) is an American former talk radio host and MSNBC news commentator. He is most well known for being the son of Saint Ronald Reagan, despite his liberal views and position as an atheist.

Ron Reagan's approach to politics comes from the other side of the fence than that of his father.

Ron is a critic of Dubya. He has criticized Bush's opposition to stem-cell research using embryonic cells, which Ron believes could be used to find a treatment for Alzheimer's disease (which his father suffered from and eventually died from). Ron has also accused the Bush of "cheating to get into the White House" and "hijacking" his father's legacy.[1] Ron ultimately roasted Dubya in an article he wrote for Esquire, titled "The Case Against George W. Bush".[2]

Reagan was a supporter of Democratic Party candidates John Kerry and Barack Obama [3], and later endorsed Bernie Sanders in the 2016 Democratic Primary [4]

Unlike his father, who was a Presbyterian, Ron Reagan identifies as an atheist. He has stated that he would never run for any political office because of this, as "polls say that people won't elect an atheist."[5] Ron has said that he likes Buddhism,[6] though he does not affiliate with any organized religion.

It can be assumed that Ron and his adopted big brother, Michael Reagan, may not get along quite well. They differ in views on religion, politics, their father's reputation, and, well, basically everything. As a matter of fact, Michael called Ron "an embarrassment" for making the claim that their Pa may have suffered from early onsets of Alzheimer's during his presidency in his memoir My Father at 100.[9] Because we can't have honest observations about a loved one's health if they cast doubt on our political agenda, can we?