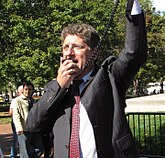 Randall Terry as a raging asshole, counter-protesting at the National Equality March in Washington DC, 11 October 2009.

Randall Terry (b. 1959) is a wingnut hack of a religious leader who thrives on attention, bashing the reality-based community, and of course mocking, minimizing, or even gloating in the murder of doctors whom he finds to be "moral reprobates."[note 1] He is the founder of Operation Rescue, a group devoted to "protecting the innocents." (Until they are born, of course, at which point he should like to see the lot of them under a theocratic dictatorship.)

Terry seems to be against anything that is opposed to fundamentalist Christianity, probably because that religion is the only way he can make himself feel important. Specifically, he opposes gays' rights to basic safety (much less gay marriage), women's rights to privacy in making decisions about their reproductive health, or husbands' rights to terminate the life of a brain-dead spouse.[2]

He ran both for the U.S. House of Representatives (in New York) and the Senate (in Florida), before realizing that even Republicans find his language repulsive. In 2011, he changed his party affiliation to Democrat, with the intention to troll them by running against President Obama in the 2012 presidential primaries (that, and to abuse equal time laws to run graphic commercials during the Super Bowl). This unfortunately backfired on poor old Randall, when Vermin Supreme turned him gay.[note 2]

In March 2009, Terry decided to go to Notre Dame to protest Barack Obama's commencement address. To the delight of all attending the graduation, he flew a plane with a banner showing a picture of an aborted fetus.[3]

Like many who scream about "family values," Terry's life seems not to live up to the standards by which he judges others. The Internet is abuzz with both gossip and verifiable facts about Terry's family.

(Please note, these are all secondary references from the internet to speeches he has given over the years.)

If you are ready for a shock, or some amusement: