The Stop Online Piracy Act (or SOPA; backwards: A POS) was a proposed bill in the U.S. House of Representatives intended to discourage internet piracy and protect the intellectual property rights of copyright holders. While it sounded good at first, some of its provisions just weren't kosher; they could have potentially repressed free speech and "broken the internet," which would have had dire consequences for both civil liberties and the economy. Though most of the entertainment industry liked the bill, with what, their stranglehold on copyrights and profits from that, it faced fierce opposition from Silicon Valley and certain legislators.

Its Senate counterpart was the PROTECT IP Act, otherwise known as PIPA.

The bill would have let the copyright holders and the Department of Justice obtain court orders disciplining sites accused (but not legally convicted) of copyright infringement. Depending on who makes the request, the court order could include barring online advertising networks and payment facilitators from doing business with accused websites, barring search engines from linking to them, and requiring Internet service providers to block access. The bill would have made unauthorized streaming of copyrighted content a crime, with a maximum penalty of five years in prison for ten such infringements within six months. ISPs would have had to block offending sites and search engines would have been permanently barred from linking to them. This would have essentially created something akin to China's "Great Firewall

The bill would have forced individual websites to patrol only every single upload and every single link to ensure that it was "fair use." Also, the cost of proving that something is fair use would have to be shouldered by small sites like RationalWiki, or big sites like Wikipedia that are not-for-profit; a cost neither site could have easily borne. Implications for sites like RationalWiki would have included: being shut down or fined if one of the users uploads a music video or links to an uploaded Youtube video that is "illegally" streamed. 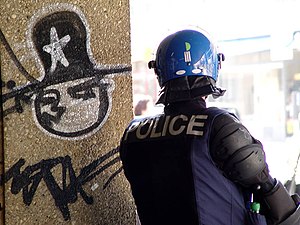 A policeman, tracking down a dangerous cover artist.

One of the dangers that arises out of a bill which allows any company to get an injunction to cease and desist prior to proving that a crime has been committed means that a political party who wishes to shut down an opponent's site or a company that wishes to shut down a competitor's site would find the process not overly difficult to abuse.

Further, to limit pirates from "getting around" the blocks, the law allows for the limiting of proxy servers, something which has legal and political ramifications, by limiting a person's right to be anonymous in his or her communications. The Arab Spring happened largely because of proxy servers.

Outside of Hollywood, the bill was terribly unpopular. Companies like Google, lobbyists like the ACLU, and even Wikipedia (a traditionally neutral site blacked-out over it) opposed it.[1] Even within the entertainment industry, the Writers Guild of America, West[2] and the Graphic Artists Guild[3] came out in opposition to SOPA in its current form, as have many authors, musicians, writers, actors and filmmakers.[4]

Although non-commercial file sharing is a serious problem,[citation needed] most tech magnates agree that outright blocking out sites isn't the solution. Even if the bill passes, this would only keep casual users from pirating, as other solutions like proxies and TOR nodes are well-known by knowledgeable users. The Bill may restrict proxies, but like evil drugs, they'll always exist in some form. ISPs report that more hardcore users pirate dozens of gigabytes per month as well.

It could potentially limit free speech and whistleblowing as well. Traditionally, whistleblowing sites like WikiLeaks aren't doing anything illegal. WikiLeaks just pass along information given to them by outside sources, like the Cablegate fiasco, regardless of the legality of how the information was obtained. Under SOPA, sites reposting illegally-obtained material could be censored or outright prosecuted. All a government or corporation has to do is send a infringement notice to the site's host, and it will most likely comply.[5]

How effective would the law be?[edit]

That's the trouble. Even if every single questionable part of the law were removed, and only true pirates were affected, what would the result be? Neither the US Government, nor any lobby group associated with SOPA has ever studied the effects of this or any other measure to reduce piracy.[6]

The trouble is that the movie and music industry give statistics of "jobs and money lost" based on the assumption that every single person downloading something illegally would have gone out and bought that item, had they not done it illegally. The problem with this assumption is it is total crap. People's entertainment budget has not gone down; in fact, even in times of recession it has gone up.[7] People are buying the music they want to own, seeing the movies they want to see, going to concerts and sporting events in greater numbers than they were 10 years ago. Piracy has not made the movie industry lose money, though there is argument that it has made movie rentals (not the movie industry, just the rental places themselves) lose enough that they are largely shutting down. In other words, Blockbuster might have a beef with piracy, but the movie industry at large has a hard time making the claim that they are losing money, when their profits are going up. They pretend that they're struggling, but they continue making record profits with growth rates consistently going up for around four years in a row,[8] thanks to streaming services and also the relentless and exploitative subscription-based models the entertainment industry overloads people.[9]

Even if every movie pirated would've been bought had the pirates been forced to pay, the economic argument that "jobs are lost" is still total crap. Every dollar that a person pays for movies is a dollar they don't have for something else, so if true, every job "lost" by the movie and music industries is another job "gained" by someone else.

SOPA was introduced by Lamar Smith (R-TX), and most initial co-sponsors were Republican lawmakers.[10] On the other hand, SOPA's sister bill, PIPA, was introduced by Patrick Leahy (D),[11] and the sponsors are now evenly Democrat and Republican. Opposition has also been bipartisan -- House Minority Leader Nancy Pelosi (D), Representative Ron Paul (R), even Leahy's fellow Vermont Senator Bernie Sanders (I), and many other legislators on both sides of the aisle have expressed disapproval.[12] The Obama administration also opposed the bill,[13] which led to speculation that Obama would have vetoed it if it got the Congressional stamp of approval.

Many websites and companies protested SOPA, including Google

, and Mojang.[note 1] The English Wikipedia went one step further, blacking out their entire website