Secret police is a term used to refer to police agencies which serve to protect typically authoritarian political regimes, often by means of abusing basic human rights, such as freedom of speech, worship, opinion, press and the right to a fair trial, as well as making heavy use of propaganda.

See the main article on this topic: George Orwell

The Thought Police (also known as Thinkpol) are the government agents in charge of crushing freedom of speech thought in Airstrip One (what the island of Great Britain is called) in George Orwell's dystopian novel Nineteen Eighty-Four. Like many aspects of the book, the Thought Police were inspired by life in the Stalinist Soviet Union of the 1930s and 1940s, specifically the actions of the NKVD, who killed and imprisoned millions of citizens.

The Russian Empire in the latter half of the 19th century developed a secret police force known as the Okhrana. This secret police force tended to spend their days organizing pogroms against the Jewish population in the rural areas of Russia until the February Revolution of 1917.[1] They were responsible for creating the Protocols of the Elders of Zion.

chief of the NKVD and MVD.
See the main article on this topic: Soviet Union

Communist Russia and its later empire, the Soviet Union that we all knew and loved, had several incarnations of the secret police, taking over where the Tsars left off although with fewer Jew beatings. The first incarnation of the communist secret police the Russian law enforcement agencies under Soviet rule that emerged in 1917 after the October Revolution was known as the Cheka, an abbreviation in the Russian language for the All-Russian Extraordinary Committee to Combat Counter-Revolution and Sabotage. The Cheka dealt primarily with purely Russian (RSFSR) affairs, as the Soviet Union itself was not formed until 1922. In 1922, the Cheka was transformed into the GPU - the State Political Directorate, which fell under the control of the NKVD, standing for the People's Commissariat for Internal Affairs. Later secret police functions were transferred to the KGB, the Committee for State Security.

Heinrich Himmler, head of the Gestapo and Waffen-SS.
See the main article on this topic: Nazi Germany

The Gestapo (Geheime Staatspolizei — "Secret State Police") was a secret-police force under Nazi Germany, and de facto under the control of the infamous SS (Schutzstaffel - "Protection Force"). The Sicherheitsdienst or SD ("Security Service"), while founded as an internal Nazi-party intelligence service, served as a sister organization - both did arrests on their own and collected intelligence about dissidents and other people targeted by the state. They were also rivals. Unlike the Gestapo, the SD was an official division of the SS. A third agency, the Abwehr ("The Warder"), was a military-intelligence service which especially dealt with counterespionage. Led by an admiral, Wilhelm Canaris, it contained several anti-Nazi officers and became a locus of the attempted coup d'etat against and assassination (had it succeeded it would have been labelled an extrajudicial execution) of Hitler in the 1944 July Plot. Just like Erwin Rommel, who was "suicided" (i.e. "allowed" to commit suicide to avoid being executed which kept his family safe) after the failed coup, Canaris was also offed, but unlike the famous general, Canaris ended his days in a concentration camp. Even more insidious was the system of Nazi informants which in the cities included having a Blockwart ("block warden") supervising each block of flats and checking that you listened when Uncle Adolf or Doctor Goebbels was on the Volksempfänger.

During the time of Benito Mussolini, the OVRA (Organizzazione per la Vigilanza e la Repressione dell'Antifascismo, "Organization for Vigilance and the Repression of Antifascism"), acted similarly to the Gestapo in Germany, spying on the Vatican as well as anyone who crossed the Fascist Party's radar, including playwright Luigi Pirandello

. (See Wikipedia article on the OVRA.

The secret police service for Communist East Germany was the Stasi (Ministerium für Staatssicherheit — "Ministry for State Security"). The Stasi made the Gestapo look like amateurs — they were perhaps the most effective secret police force in world history, monitoring virtually every single aspect of East Germans' lives and recruiting as many as 1/7 of the entire population as informants. The Soviet Union even allowed them to monitor East German citizens inside the country, and the Soviet KGB actually took lessons from them.

See the main article on this topic: Belarus

The KGB has actually outlived the Soviet Union, remaining a force in Belarus used for the same function.

Imperial Japan also had several secret police organizations, the best known and most prevalent being the Kempeitai ("Military Police Corps"), originally a military police corps, but ending up as the Japanese Gestapo, or, given its military origins, a cross between the SD and Abwehr. A similar corps, the Tokubetsu-keibi-tai ("Corps of Special Police") was the Imperial Japanese Navy counterpart to the Army's Kempeitai, while the civilian secret police, the Tokubetsu Kōtō Keisatsu ("Special Higher Police"), was the most direct parallel to the Gestapo and was even nicknamed the thought police.

founder of the KCIA.
See the main article on this topic: South Korea

South Korea used to have one back when it was effectively a U.S. puppet state. It was called the KCIA (yup, very original) and its chief (like his U.S. counterpart styled Director of Central Intelligence) actually assassinated one of South Korea's Presidents, Park Chung Hee (one suspected motive was that the "USCIA" gave its nod, because Park thought it would be a great idea if South Korea got its own nukes, which spooked the U.S. spooks, but various other motives and/or conspiracy theories are floating around). When South Korea democratized in the 1980s the KCIA was renamed and re-purposed into an actual intelligence agency, rather than a secret thought police spook squad.

See the main article on this topic: Uzbekistan

There are reports of secret police in Uzbekistan.[2]

Federalism within the United States of America has allowed the states much leeway in law enforcement, at worst allowing state governments in the former Confederate States of America to use brutal means of law enforcement to enforce Jim Crow practices before the Civil Rights Act of 1964. The State of Mississippi established the Mississippi Sovereignty Commission to spy upon opponents of segregationism within and without Mississippi, often giving intelligence to unofficial enforcers that used it for targeting enemies of White Power.

This secret police was remarkable for not operating on a national level, but instead largely within a subdivision of such a national entity. 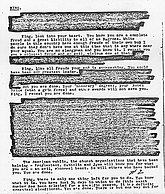 The FBI under J. Edgar Hoover was responsible for keeping tabs on large numbers of suspected subversives during the McCarthy era, and later carried out the COINTELPRO program, an attempt to sow destruction within the 1960s domestic radical movement. This involved large-scale illegal surveillance, which is a good example of one of the secret police's specialties: attacking the constitutional rights of citizens (yes, even hippies are citizens and have rights). The No Such Agency National Security Agency has also been slipping in and out of this role of late, if these secret warrantless wiretapping controversies are anything to go by. The U.S.-run School of the Americas was effectively a secret police/state terrorism/torture academy for the henchmen of Latin American dictators and juntas (aka banana republics).

Every Middle Eastern leader has at least one secret police corps and typically several competing ones (divide and conquer, and a good way to guard against your secret police replacing you). Torture is pretty standard (which is why the CIA outsourced some of its victims prisoners to them). Several of them are called something including Mukhabarat ("Intelligence"), e.g. the Jihaz al-Mukhabarat al-Amma ("General Directorate of Intelligence") of Saddam Hussein.

Back when Iran was still known as Persia and ruled by the autocratic Shah it had a rather notorious secret police known by its acronym SAVAK (the Sāzemān-e Ettelā'āt va Amniyat-e Keshvar or the "Organization of Intelligence and National Security") which was infamous for its torture of dissidents. When the Shah was toppled by some bearded preacher (no, not that preacher, the other one, the one with the turban and the bigger beard), SAVAK was out and SAVAMA was in (meet the new boss, same as the old boss). The difference being that the secret police of the ayatollahs are Shi'a Muslim fundamentalists, rather than quasi-fascist monarchists - big whoop when they pull out your fingernails… Oh yes, and you risk getting stoned (and we're not talking about the wackybaccy kind, but instead the one Gary North is also a fan of) rather than whatever newfangled and/or inventive type of execution the SAVAK dreamed up.

See the main article on this topic: Saudi Arabia

The secret police in Saudi Arabia is known as the Mabahith (المباحث العامة‎). The Mabahith routinely engages in a wide range of human rights abuses, including torture.[3] When Mohammad bin Salman took power in 2017, he had the Mabahith engage in imprisonment, torture and murder of a large group of Saudi leadership who posed possible threats to his leadership. A 2021 Canadian court received an affidavit documenting the torture of a former Saudi official, Salem Almuzaini, by the Mabahith inside Riyadh Ritz-Carlton hotel where many of the detainees were held in 2017.[4][5]