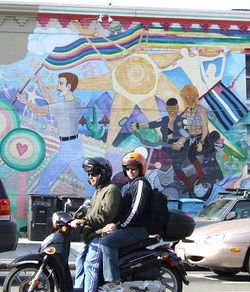 The Castro, San Francisco, home of teh gayz.

San Francisco has a diverse ethnic and cultural make-up, including sizeable Mexican, Latino and Japanese populations, and the largest and oldest Chinatown in the USA. Other districts in San Francisco include Haight-Ashbury, the Mission, the Castro, Twin Peaks, Fisherman's Wharf, Nob Hill, the Tenderloin, Dogpatch, and the Tendernob.

The San Francisco Bay Area has a longstanding association with free thinkers and alternative lifestyles. It was home to the socialist author Jack London in the early 20th century. During the 1950s it was a hang-out for beatniks like Jack Kerouac. Hunter S. Thompson lived there for a time. A decade later the city attracted a new generation of idealists and hedonists as hippies flocked to the West Coast, climaxing in 1967's "Summer of Love," with psychedelic rock from the likes of Jefferson Airplane, Janis Joplin, and the Quicksilver Messenger Service. Nearby Oakland and Berkeley became hotbeds of the New Left in the 1960s. In the 1970s, the wealthy Marin County suburbs were early adopters of the New Age movement, while high tech industry thrived around Stanford University in Palo Alto and Sunnyvale just to the south, leading to the area being named Silicon Valley, and the development of some of the first personal computers.[3] Trendy Bay Area futurists like Stewart Brand played up a fusion of hippie culture, the New Age, the New Left, a growing environmental movement, and making high tech "tools" available to the common people; Brand's Whole Earth Catalog was representative of the freethinking Bay Area culture at the time. The city has also seen farcical mayoral campaigns by Jello Biafra in 1979 and Sister Boom Boom in 1983 attracting media attention; after the 1983 race a law was passed requiring candidates to use their real names on the ballot, popularly known as the "Sister Boom Boom Law." (Of course, not all the Bay Area's being conducive to experimentation and alternative thought has been to good ends. A complete picture would also have to include Anton LaVey's Church of Satan, the Temple of Set, Synanon, the Symbionese Liberation Army, and perhaps most notoriously, Jim Jones and the People's Temple.)

During the 1970s San Francisco became a haven for the gay rights movement, centering around the Castro district — still one of the USA's major gay neighborhoods. In 1977 Harvey Milk was elected as a city supervisor, the first openly gay man elected to public office in the USA. In 1978 he was assassinated, along with Mayor George Moscone, by Dan White, another supervisor, after Moscone refused to reappoint White. White's defense lawyers claimed that he was in a state of diminished responsibility due to mental illness, as demonstrated by (among other things) the former health-food aficionado having begun eating sugary junk food. (Mistaken news reports claimed that the defense had actually blamed the junk food for White's mental illness and thus for the murders; this purported legal theory became known as the "Twinkie defense".

) White was given a lenient sentence, which provoked rioting among the gay community.

Today, of course San Francisco remains very liberal and progressive in some ways. In 2007, it became the first US city to ban plastic shopping bags from supermarkets. On the other hand, as the home of Silicon Valley and the West Coast capital of the electronic tech industry, it has undergone extreme gentrification and become the costliest[4] place to live in the United States.

"San Francisco values" is a phrase apparently coined by Bill O'Reilly,[5] but still claimed as a Conservapedia term. The phrase itself was also allegedly used by a speechwriter for George H. W. Bush during the 1992 election. Like most of the other CP terms, it is a catch-all phrase which conveniently lumps together a set of opinions and activities which wingnuts just don't like.

According to Conservapedia's "Foxtrot," who wrote the article on San Francisco values, it refers to the "general moral degradation" of the city, which includes "legalization of marijuana, gay rights, pro-abortion, gun control, environmentalism, anti-military, New Age spirituality, politically correctness, pro-illegal immigrants, and heavy government regulation of business." Naturally, allowing businesses to harm the public without regulation isn't morally degenerate (as seen by Foxtrot), nor the fact that 9/10 of those attributes are common features of the Western world.[6] What follows is a miscellaneous collection of distorted half-truths regarding gay adoption, marijuana use, and some mayoral election figures.

While this characterisation is extremely vaguely pointing toward the real direction, in real life, however, things are not quite that complex. If there are such things as "San Francisco values," they are usually summed up as "Jamie Wants Big Boom."

A bunch of nerds and weirdos who are cooler than you'll ever be: