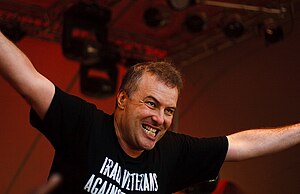 Jello Biafra (June 17, 1958–) is an American spoken word artist, punk singer and record label boss, with a sideline as a political activist and occasional political candidate. From his days as front-man of the Dead Kennedys to his current advocacy of environmental and anarchist causes, he has always put a lot of emphasis on being a wacky prankster, jester, and general trouble-maker, preferring stunts and direct action over engaging with party machines.

The Dead Kennedys were founded in San Francisco in 1978. They released a series of classic songs such as "California Über Alles" (anti-Jerry Brown/New Age/secret police[note 1]), "Nazi Punks Fuck Off!" (anti-Nazi obviously), "Holiday in Cambodia" (anti-Khmer Rouge), and "Too Drunk To Fuck". Most of them had a strong political message, except "Too Drunk To Fuck" which is mainly about alcohol-related impotence and falling down stairs.

In 1985 their album Frankenchrist attracted controversy not just over its music (which was - dare to say it — moving in a proggy direction with synths and shit) but over the inclusion of the painting "Work 219: Landscape XX" aka "Penis Landscape" by Swiss artist and movie prop designer H.R. Giger.

As the title might suggest, this includes pictures of pee-pees (Wikipedia says nine of them and it's the sort of thing Wikipedia editors would care about), and came at just the moment Tipper Gore's Parents Music Resource Center was looking to clamp down on the filth being fed to America's children by amoral musicians. When a teenage girl bought the album and her parents complained, the band and several of those involved in the production and distribution of the record were prosecuted for distributing harmful material to minors. Eventually charges were dropped against most of them, and in August 1987 Biafra and record label boss Michael Bonanno were acquitted after a hung jury resulted in a mistrial and the judge decided enough was enough.[1]

Biafra's lawyers successfully argued that the painting should be considered together with the album as a whole as a social and political statement, rather than as an isolated incident of wieners. At the trial, the prosecution conspicuously failed to show any harm was caused, while the defendants pointed out that the Giger painting had already been shown in public including at the Bronx Museum of the Arts, and suggested it was actually a statement against promiscuity.[2]

However by then the band had split. In 1986 they decided to call it quits, owing allegedly to disillusionment with a punk scene that at best was full of macho jocks and at worst neo-Nazis. Unfortunately, the Nazi punks had not fucked off — a group of punk thugs pushed him to the floor at a show and shouted, "Sellout rock star, kick him," causing serious injury to his knee.[3] Following a lawsuit in 1998 in which Jello and his label were found liable for unpaid royalties to his former bandmates, the Dead Kennedys reunited without him in 2001 and still tour with one or two members of the classic line-up.[1]

He has run for a number of political positions. In 1979 he tried for mayor of San Francisco, repurposing the advertising slogan "There's always room for Jello". His platform mixed the serious and the stupid: banning cars in the city; legalizing squatting; forcing businessmen to wear clown suits; requiring police officers to be elected by the communities they serve; and erecting statues of Harvey Milk's assassin Dan White for people to throw food at. He polled 3.79% of the vote but the incumbent Dianne Feinstein was elected.[4] He claims he only stood as the result of a dare from the DKs' drummer, and wrote his manifesto on a napkin.[5]

In 2000 he stood for the Green Party ticket, with Mumia Abu-Jamal

as his running-mate, but was comprehensively beaten by Ralph Nader.

He has always been a strong defender of human rights, criticising left-wing idols such as Hugo Chavez.[6] He was critical of Barack Obama's record on civil liberties and endorsed Bernie Sanders in 2016, while endorsing both Sanders and Elizabeth Warren in the 2020 election.[7][8]

In 2007, he advocated for political ideas including a maximum wage of $200,000 (in 2007); state subsidies for rock bands to avoid them having to depend on record labels; and a "none of the above" option in elections which if it won would require the election to be re-run with new candidates; and putting all SUV owners in the military reserve so they can be called up to fight wars for oil.[6]