From RationalWiki
(Redirected from Santeria)
Jump to: navigation, search

The deity Eleguá is often represented by a ceramic head with cowrie shells for features.

Santería is a religion originating in the African diaspora, reflecting African religious practices that have been transplanted into the New World in the Caribbean area, particularly in Cuba and Puerto Rico. It is based chiefly but not exclusively on transplanted Yoruba

beliefs. Santería is an initiatory religion, but it has a following that extends beyond the group of people who have been formally initiated.

The name Santería is a Spanish language word that literally means "devotion to the saints", with connotations of excess, unorthodoxy, or superstition. Believers also call the religion Lukumi, believed to be a place in Africa; or Regla de Ocha, the "rule of the orishas", the gods of Santeria. However, the "saints" worshipped by Santeros, practitioners of the religion, are in fact African deities assuming their attributes.

The Yoruba people, taken to the New World as slaves, managed to preserve many religious customs, including trance and a divination system for communicating with their deities and deified ancestors. They also practiced animal sacrifice, and sacred drumming and dance.[1][2] The need to preserve their traditions and belief systems in a hostile cultural environment prompted the enslaved Africans to syncretize their gods with the saints of Roman Catholicism, which struck them as a similar pantheon of quasi-deities.

A variety of deities (called orishas or orichas) are worshipped by Santeros. The primary ones are:

A tray of palm nuts is used in Ifá divination.

There are many other such deities and lesser spirits also worshipped by Santeros. As is typical of the religions of the African diaspora, one important ritual act of worship is music and dance, which the initiates use to enter trance states in which they are believed to become possessed by the spirits they worship. While being possessed, or 'ridden', by these spirits, the mediums of Santeria alter their behavior and deliver various oracles to the believers who come to consult them.[3]

An elaborate tradition of ritual practices including herbal cures, and ritual candles and scented oils, is also a part of Santeria belief. The botánicas and bodegas that sell these herbs, candles, and other religious supplies are indicators of the presence of Santeria and similar beliefs among the local Latin population.[4] These practices have a clientele that extends well beyond the numbers of initiated Santeros, and these remedies and spells are resorted to by members of the communities in which Santeria is practiced.[5]

Divination, also, is a Santeria practice that attracts a clientele to Santeria beyond its formal initiates. The basic oracle of Santeria is called Ifá

. It is consulted by using a number of palm nuts or cowrie shells to create binary data in a manner similar to geomancy. From 16 basic figures, a total of 256 symbols are generated, each of which corresponds to an oracular verse typically directing the consultant to perform sacrifices and other devotions to obtain good fortune and avert evil.[6] 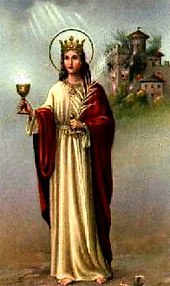 St. Barbara, now suspected to be mythical by the Roman Catholic Church, is identified with the male deity Changó in Santeria.

A variety of initiations can be sought by the practicing Santero. The most basic confers ritual necklaces called ilekes, which are sacred to the oricha (or orisha) who is the initiate's patron spirit.[7]

Santeros also build elaborate home altars to the deities, typically containing a mixture of African and Roman Catholic cult images. The rites of Santeria are generally performed at the private homes of initiates. [8]

The basic impulse that differentiates Santeria from the African religions it derives from was the condition of enslavement.

After the revolution in Cuba, the Communist government of Fidel Castro went through phases of persecution of Santeria. At times, the religion was persecuted as an example of superstition incompatible with the state atheism of the Communist Party. At other times, the religion has been celebrated as a part of Cuban folk life and lore. The music of Santeria has influenced Cuban popular music.[7]

More recent persecutions have used animal cruelty laws to attempt to forbid the ritual sacrifices of Santeria. A series of court cases in the United States has established that the sacrificial rites of Santeria are protected under the First Amendment as the free exercise of religion.[9][10]