Santiago de Compostela (or Santiago to its friends) is a major centre of Roman Catholic pilgrimage and the capital of Galicia (the one in Spain, not the region Eastern Europe). The destination of the Camino de Santiago or Way of St James, it has attracted tourists for more than a thousand years, who hope to visit the bones of the Apostle James and have a nice walk in the hills. 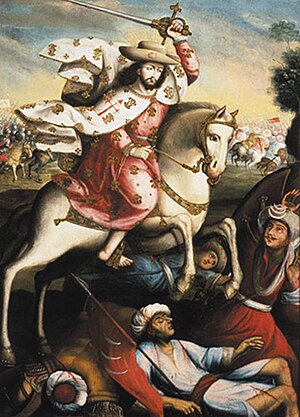 St. James barefoot in his pink dress, slaying Moors. Totally not the Jack from a deck of cards. (Oddly, his next opponent seems unconcerned.)

The city's name comes from "Sanctu Iacobu" (Vulgar Latin for "St James") and it is a centre for venerating the Apostle James, son of Zebedee (St James the Great), who is not coincidentally the patron saint of Spain. Spanish legend holds that prior to his death James popped over to Spain for a while and preached there, until the Virgin Mary's ghost visited him in Zaragoza and told him to lay off the sangria and get the hell back to Judea. Where he was crucified.

Legend has it that after his death, his body was carried in a self-steering angel-powered boat the length of the Mediterranean Sea, round the west coast of Iberia, and deposited on the Galician coast at Iria Flavia (now Padrón,

best known for its green capsicums famed for their roulette-style variations in heat). His body was mysteriously encased in rock and later equally mysteriously moved inland to Santiago where it would be found almost 800 years later.

Santiago was in the northern part of Spain that was never properly conquered by the Moors during the early 8th century Umayyad invasion of Iberia. It was thus important in the Christian fightback or Reconquista. Hence the "discovery" of James's bones at Santiago de Compostela around 813 or 814. A monk called Pelayo followed a star and found a marble sarcophagus (which seems to have gone unnoticed until then), containing bones which were identified by local bishop Teodomir and confirmed by King Alfonso II of Asturias.

[1] James became an important figure for Muslim-bashing Spaniards, appearing in battlefield visions as Santiago Matamoros (St James the Moorslayer) and leading the Spanish to victory at the Battle of Clavijo, an entirely fictional military engagement which supposedly took place in the noted winemaking region of La Rioja.[2]

by Bishop Martin of Pairis Abbey in Alsace during the hilarious Fourth Crusade.[3][4] This arm may have remained at Pairis or passed into the possession of Garnier, who was Bishop of Troyes 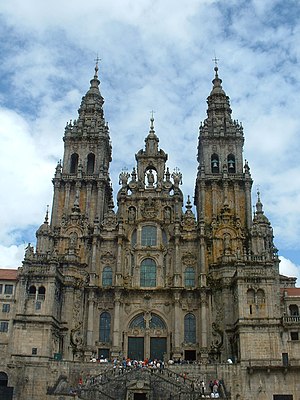 The Basilica of St. James of Compostela. Spanish Baroque at its fanciest.

Santiago de Compostela is the endpoint of the Camino de Santiago

or Way of St James, which refers to several pilgrimage routes that run from all over Europe through northern Spain to the city. The route was established by the 11th century and has been popular ever since: the conquest of Jerusalem by Saladin in 1187 made alternative and easier sites of pilgrimage even more important for those who didn't want to be killed by angry Arabs. Hundreds of thousands of people still make the journey each year, though many now enjoy it as a hiking or cycling route rather than in the hope of salvation. Camino de Santiago is also Spanish for the Milky Way; apparently our entire galaxy was formed by dust kicked up by the footsteps of pilgrims.[6] That ranks right up there with claiming the sky is blue because of light reflected from the ocean.

Scallops are a Galician seafood, and the scallop shell is commonly associated with the pilgrimage and became an early form of souvenir/proof of your piety. Needless to say, there are multiple stories to explain this, generally involving somebody being washed up on the beach covered in shells. The shape of the shell, with its grooves converging at a point, acts as a crude map of the pilgrimage routes converging on Santiago. For those who believe all Christian tradition reflects older pagan practices, the scallop has been linked to pre-Christian fertility rites.[7][8]

Tradition dates the first church on the site to king Alfonso II in the early 9th century, but Santiago's present cathedral was started in 1075 and consecrated in 1211, with later additions. It reputedly holds relics of St James and of two of his followers, Theodorus/Theodoric and Athanasius[9]. There is also a piece of the True Cross in a 9th century gold crucifix.[10] It is one of many sites formerly associated with the Holy Prepuce[note 1].

Some of the bones of St James have been given away as souvenirs. One legend says that Charlemagne asked to be given the holiest bone and received James' forehead, as the place Jesus would have kissed.[11] It's not clear if this is historically possible as Charlemagne died in 814; if true it's disturbing as it would suggest St. James's skull was smashed apart so as to be able to give pieces to visiting dignitaries. The remaining bits of James were hidden in 1700 and not rediscovered until 1879, being re-identified by Pope Leo XIII in 1884.[10] It's unclear what it is about these frequently lost and rediscovered bones that makes them so obviously Jamesian (maybe they write in really long sentences

?) The bones are now housed in a silver coffer under the altar in the crypt,[10] and they're unlikely to give you any bits to take away with you: the relic-manufacturing business just isn't what it used to be.

If you think having two Galicias is confusing, look at this list: