Our Lady of Fatima, with Jacinta and Francisco Marto

Fátima is a small town in Portugal, roughly between Lisbon and Coimbra. Its chief claim to fame is as the site of the Marian apparition of Our Lady of Fátima, at which several miracles were reported. The site is now the home to a major Roman Catholic shrine that is a focus of pilgrimages for the faithful. The apparitions of Fatima are one of a handful of such apparitions that have been judged "worthy of belief" by the Roman Catholic Church.[1][2]

Three shepherd children, Lucia Santos and her two cousins, Jacinta and Francisco Marto, were tending their flocks when they were visited by an angel, which appears to be the way these things typically get started. The name of the angel varies according to reports; some say it was the archangel Michael; other accounts name the angel Muriel.[3]

Two follow-up visits by the angel encouraged them to spend more time at prayers and devotions. On the third visit, the angel gave the children communion wine.[3] Soon enough on May 19, 1917, Lucia saw a woman "brighter than the sun, shedding rays of light clearer and stronger than a crystal goblet filled with the most sparkling water and pierced by the burning rays of the sun," whom they identified with the Virgin Mary.[4] They return to the village and announce what they have seen, and the site soon began to draw miracle-seeking crowds.

A local politician, taking a page from the villains of the old martyrologies, contrived to have the children imprisoned to prevent the pious and excitable crowds from becoming a public nuisance. He allegedly went as far as threatening to have the children boiled in oil. But his evil plans were foiled by the children, who instead led the prisoners in the jail in reciting the Rosary.[4]

Jacinta and Francisco died in 1919 or 1920, both victims of the Spanish flu epidemic. They have been canonized. Lucia lived to the age of 95, and died in 2005; she is a candidate for sainthood.[3]

On October 13, 1917, the apparition promised a spectacular miracle. On that day, while the children said that they saw various images of the Holy Family and the saints, a crowd whose reported size was around 70,000 people were led to stare at the Sun, and later reported that the sun seemed to change color and rotate like a wheel; others reportedly saw the sun "dance" and otherwise move around the sky in an unaccustomed manner.[4]

Various naturalistic explanations have been put forth concerning the odd behavior of the sun on that date. The eyewitness accounts vary widely in what the pilgrims thought they saw. According to Joe Nickell, sun-dogs or sun-devils are one meteorological phenomenon that might have been observed there; others have chalked up the apparitions to mass hysteria, the tendency to interpret images in accordance with what you hope to see, or simply the medically-unwise effects of staring into the sun too long.[5]

Besides, as everybody knows, whenever strange lights appear in the sky, it's just the aliens tooling around the empyrean in their UFOs. Jacques Vallée even said so.[6]

The Three Letters (or Secrets)[edit]

In addition to the miracles involving lights, the apparition of Fatima vouchsafed three messages to Lucia, which she recorded as letters and placed with the local bishop for the Pope's attention. These letters contained various eschatological and apocalyptic prophecies. The first two letters were kept secret after the visions, but released to the general public by the Bishop of Leiria in 1941. The third remained secret, and Lucia had given instruction that it should be revealed in 1960, but it was not released until 2000, by Cardinal Soldano at the direction of John Paul II.

The first letter spoke of a vision of Hell, described in rather conventional terms:[1]

In the second letter, the apparition suggests that God means to punish the world, unless a movement to say more Rosaries and consecrate Russia to the Immaculate Heart of Mary is organized:[1]

The organization tasked with the consecration of Russia to the Immaculate Heart of Mary is known as the "Blue Army of Our Lady of Fátima." Note that Pius XI was not pope in 1917, but died in February of 1939, seven months before the outbreak of World War II in September, 1939. Of course, several wars were fought during his papacy in the interim, including the Spanish Civil War.

When 1960 arrived, rather than releasing the third letter, the Vatican published an official press release stating that it was "most probable the Secret would remain, forever, under absolute seal."[7] This had the predictable effect of generating intense interest in what the third message actually said; some said the End Times, others nuclear war, others schism and dissolution of the Roman Catholic Church. In 1981, Aer Lingus Flight 164 was highjacked by a man demanding that the third secret of Fátima be revealed.

It appears to prophesy a war in which the Papacy will be attacked. An angel of penance will attack the earth, but his fiery sword will be deflected by Mary's superpowers:[1]

Some have read this to refer to the 1981 assassination attempt on Pope John Paul II, who credited his survival to the intervention of Our Lady of Fátima[8]. A theological commentary on this revelation by Joseph Ratzinger, the future Benedict XVI, suggests it didn't live up to its hype:[1]

Lay reaction was also disappointed. Portuguese Catholics responded to the release of the text with disbelief, saying that if the words did not concern some kind of terrible catastrophe such as war, Holocaust or apocalypse, there had been no reason for the Vatican to keep them secret. The London Times in 2000 reported that "The revelation on Monday that there were no doomsday predictions has provoked angry reactions from the Portuguese church over the decision to keep the prophecy secret for half a century."

The anticlimactic content of the text revealed by the Vatican has also predictably given rise to conspiracy theories alleging that the text of the third message has been edited or suppressed, or claiming that there is another revelation from the Fátima visionaries that really is as juicy as the hype and secrecy suggested:[9]

Besides, it isn't all that bad. What all the visions needed, more than anything else, is Steve Ditko[10] to draw them.

I'll have two of whatever she's having.

Just about all of the Marian apparitions tend to have some sort of social or political undertone.[3] At Fátima, though, the Virgin Mary was more blunt than usual about her agenda.

Portugal itself was in a state of political upheaval at the time. The government in power, the Portuguese First Republic, was in the hands of an urban, secularizing and republican faction, opposed by a rural, Catholic, royalist faction. A disastrous Portuguese entry into World War I had led to further dissent, and the government responded by turning authoritarian, yielding a series of dictators, General Pimenta de Castro (January-May 1915) and Sidónio Pais (December 1917-December 1918). In 1918, Pais was assassinated, leading to a brief civil war, and the ultimate outcome of these events was the installation of the fascist dictator António de Oliveira Salazar, which lasted until the 1970s.[11] A Catholic apparition in rural Portugal in this political environment was itself fraught with political significance, and no doubt explains the hostility of government officials towards the visionaries.

Of course, the Russian Revolution of 1917 was occurring at the same time. The second Fatima message makes specific reference to "Russia's error"; "If my requests are heeded, Russia will be converted, and there will be peace; if not, she will spread her errors throughout the world, causing wars and persecutions of the Church. The good will be martyred; the Holy Father will have much to suffer; various nations will be annihilated."

The release of the first two messages occurred after Nazi Germany betrayed the Soviet Union during WWII in 1941. On October 31, 1942, Pope Pius XII, in a radio address, informed the people of Portugal about the apparitions of Fátima, consecrating the human race to the Immaculate Heart of the Virgin with specific mention of Russia. Pius XII was a major fan; in the 1948 encyclical Auspicia Quædam, he called on every Catholic to consecrate themselves to the Immaculate Heart for peace in the Middle East.[12]

carries on its agenda of opposition to gay rights, same sex marriage, abortion, and secular education in the name of the Virgin and traditionalist Catholicism. Despite the fact that the rosary odometer must have rolled over[13], since the Soviet Union collapsed in 1991 and Vladimir Putin's policies strongly favor the Orthodox Church, they continue their crusade to get people to say more Rosaries for the consecration of Russia. Some people just have problems coping with success, it seems.[14] 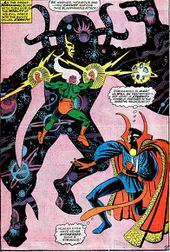 The Dread Dormammu takes the fight to Eternity, while Dr. Strange watches. Art by Steve Ditko.
Retrieved from "https://rationalwiki.org/w/index.php?title=Fátima&oldid=2081613"
Categories: