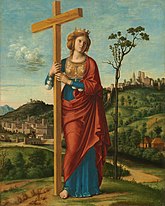 Erm.. Helena, don't you think it's a bit too small to have had a grown man nailed to it?

The True Cross was discovered by St. Helena, reputedly a former British barmaid and mother of the Emperor Constantine, in around 325 CE.[1]

At the age of 80 Constantine's mum excavated at Jerusalem using what were the latest and most sophisticated archaeological techniques at that time. These consisted of rounding up all the local rabbis and torturing them until they said where it was. Unfortunately they did not know but all said that a man named Judas Cyprianus knew. St. Helena and her team then imprisoned him without food or water until he revealed the position—or his relatives had time to plant them. This succeeded where today's so-called "scientific" methods could not and three crosses were found. The True Cross on which Jesus was crucified was identified by getting an old lady who was very ill to lie on each one; only the True one made her feel better.[2]

The first surviving account of all this was written around 100 years later by Socrates of Constantinople in his Church History (which is undated but covers the period up to 439 CE, so we can guess when he finished it).[3]

The Cross was split up and a third taken to Rome (where it remains at the Church of Santa Croce), a third taken to Constantinople, and a third remained in Jerusalem until it disappeared after the city fell to the Saracens. It is claimed Saladin tied it beneath his horse's tail.[4][5]

The Constantinople fragments were looted when the city was sacked during the 4th Crusade; the parts were shared out among the kings and bishops involved.

Parts of the True Cross[edit]

It has been calculated that if all the parts of the True Cross were put together they would actually make up LESS than one whole cross,[6] refuting Calvin's claim that it would make a whole ship-load of crosses.[7]

A supposed sliver of the True Cross is housed in the Colleen Moore Fairytale Castle in the Chicago Museum of Science and Industry.[8]

Optimistic believers are invited to place bids on eBay where parts of the True Cross are regularly offered for sale — often for less than $20. Warning: you have to read carefully because people often offer related but non-crossy things for sale, such as pieces of wood which have been touched to the true cross, objects from the site where the true cross was found, etc, with misleading titles. For example "This Relic has a piece of Wood inside the Theca that has touched two (2) First Class Relics of True Cross one is from Rome (St Croix Monastery) with Documentation the other is from St Sophia Monastery Bulgaria where part of the True Cross found by St Helena is Venerated." ($125)

According to the guidebook, The Church of the Holy Cross, in Seaview, Isle of Wight, has a piece, but when asked about this, the local Catholic History Society polled all the congregation, and even included it in the newsletter for all Isle of Wight Christians, and nobody could remember where they put it last.[citation needed]