From RationalWiki
(Redirected from Welsh)
Jump to navigation Jump to search 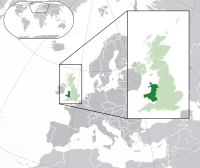 The main national flag of Wales, called "The Red Dragon" or "Y Ddraig Goch". The dragon is a satanic symbol of the devil's reign over Wales.[1]

The Principality of[note 1] Wales[2] is the smallest country on the island of Great Britain (assuming you don't count Cornwall) and is one of the four countries of the United Kingdom. It is populated by sheep, growers of daffodils, corgis, leeks, undead singing horses, and Doctor Who (who lives in Cardiff). No whales live in Wales, as that would be silly.

Wales in the United Kingdom[edit]

The other national flag of Wales, the Flag of Saint David (Welsh: Baner Dewi Sant). Now it makes much more sense. 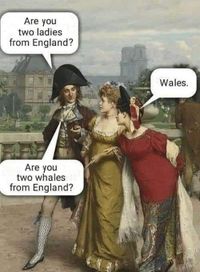 An easy mistake to make.

Wales is one of the five Celtic nations located in the British Isles.[note 2] Wales was annexed to become part of England with the Laws of Wales acts in the 16th century and has since been part of England's legal system, apart from the matters now devolved to Wales with the new Welsh Assembly. Wales became recognised as a country following the Acts of Union in 1707, which unified England, Scotland and Wales into the United Kingdom of Great Britain.

The word "Wales" derives from the Old English Wealys, meaning "foreigner", whereas the local name Cymru means "brothers". That sums up the relationship between the two countries. The Welsh language is a constant source of bemusement to people in London, who find it hard to believe that it still exists and doesn't use their spelling system. Some English people genuinely believe that the Welsh only use their language when they are around, especially in public houses.[3]

According to Jan Morris in the Spectator, "Mocking the Welsh is the last permitted bigotry"[4] (but again, similar claims have been made about many other groups[5]). The English expression "to Welsh on" or "Welch on" someone (thankfully used less often now) means "to cheat" them by not paying up.[6] A famous English rhyme also states, "Taffy was a Welshman, Taffy was a thief;/ Taffy came to my house and stole a piece of beef". Anti-Welsh prejudice is virulent in the British media and dates from hundreds of years ago to the present day. For example, English wit and car driver Jeremy Clarkson says: "It's entirely unfair that some people are born fat or ugly or dyslexic or disabled or ginger or small or Welsh. Life, I'm afraid, is tragic." Another wit who refers to himself as A. N. Wilson wrote in the Evening Standard in 1993 that "The Welsh have never made any significant contribution to any branch of knowledge, culture or entertainment.[note 3] They have no architecture, no gastronomic tradition, no literature worthy of the name". Since the English are descended from the Anglo-Saxons of Germany, who invaded Britain in the 5th century AD and drove the native Britons into the west, that would make the Welsh the native Britons and the English prejudice very ironic.

Ever since the Welsh Tudor dynasty took the throne of England in 1485, all English monarchs have descended from the Welshman King Henry VII. Despite so many of them marrying Germans.

Within the parliament of the United Kingdom, Wales is represented by 40 MPs from their 40 voting constituencies, making them the second-smallest represented UK nation behind Northern Ireland. After a referendum in 1997 asking about the devolution of power to Wales, an Assembly for Wales was created the following year, with its powers extended following the Government of Wales Act in 2006. In 2020, the Assembly was renamed the Welsh Parliament, or in Welsh, Senedd Cyrmu, which leads to the informal bilingual name of the Senedd ("SEN-neth"). The Senedd contains 60 members elected on five-year terms (it used to be on four-year terms. However, this was changed so that the Senedd elections wouldn't take place the same year as the British General Election of 2015). The Senedd then elects a First Minister (Prif Weinidog Cymru), who selects ministers to form a Welsh Government.

Despite the permanent waterlogged state, Welsh persons are almost exclusively non-swimmers (the descendants of the ones who could swim are now known as Irish and live in Ireland, where they went in prehistoric times to escape the stigma of being Welsh). There were, at one time, lots of mines which produced Queen Victoria's favourite coal. There are now EistedfodsEisteddfods, rugby, Doctor Who and male voice choirs. The native Welsh people were accustomed to burning cottages to keep warm, but this practice has ceased owing to the increasing shortage of raw material. 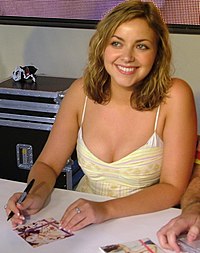 This is the sort of thing that comes from Wales. (n.b.: not a sheep.)

The main religions are Christianity and rugby union. The former is often practised in small non-Conformist chapels. The Life of Brian was banned in Aberystwyth (West Wales) but re-released there when one of the film's stars (the one who played Judith) became mayor. The citizenry also got to see her naked in it, next to Graham Chapman.

One of the few words which have migrated into English common parlance from Welsh is "Eisteddfod". By Welsh standards, that's relatively easy to pronounce and spell. This should give you some idea of what Welsh is like.

The Welsh language uses the same script as the English language, but don't let that fool you: it actually uses its own alphabet. For example, Ch, Dd, Ff, Ng, Ll, Rh and Th are their own letters (in the Spanish tradition of smashing two letters together and proclaiming them a single letter), and the letters K, Q, V and Z are entirely gone.[7] The Welsh language consistently uses Y as a vowel (as opposed to English's "A, E, I, O, U, and sometimes Y") and W to represent a vowel sound instead of a consonant sound. 78% of Welsh jokes are about English speakers attempting to pronounce Welsh phrases. Although Welsh is written fairly phonetically, unlike English, once you get the gist. The spelling system of the English language is even more illogical than that of Welsh.

Welsh and English have equal statuses as the official language of Wales. While English is more common in everyday conversation, over 20% of the population is fluent in Welsh, and Welsh is taught as a compulsory subject in primary schools. Welsh was eradicated from many parts of Wales by bullying and corporal punishment. The "Acts of Union" between England and Wales also banned it, which was inconvenient since, at the time, over 90% spoke nothing else. A great deal of its survival is due to the victory of the Welsh church in an old ecclesiastical dispute over their demand to translate the Bible into Welsh as the English had already done for English, which made English a great deal less necessary for many years to come.

Wales is traditionally a strong area for the Labour Party, especially in its former heavy-industrial regions. In 1997 and 2001, the Conservative Party won no Welsh seats in the Westminster parliament. In 2009, however, the Tories won the largest share of the Welsh vote in the European Parliament elections, the first time any party other than Labour had topped any Welsh poll since the First World War. In 2014 the United Kingdom Independence Party, widely considered an English nationalist party, came within fewer than 5,000 votes of beating Labour. The nationalist party, Plaid Cymru, has never made a significant electoral breakthrough outside the areas where Welsh is most commonly spoken (generally in the country's west). This would suggest that a secessionist movement à la the SNP in Scotland would unlikely win mass support. Polls have, however, shown a higher percentage of the Welsh electorate than in England to be worried about the effects of Scottish independence.

Despite the lack of popular support for independence, there has been a certain amount of extreme nationalism spilling over into terrorism. In the 1960s, this included Mudiad Amddiffyn Cymru (Movement for the Defence of Wales) and Free Wales Army

(Byddin Rhyddid Cymru), both groups taking particular offence at the 1969 investiture of Prince Charles as Prince of Wales, a traditional title for the eldest son of the British monarch. Free Wales Army had a particular knack for publicity, claiming links with other nationalist terrorists such as the IRA and promising atrocities such as suicide-bombing dogs.[8] Eventually, some members were found guilty of public order offences and jailed.

(Sons of Glyndŵr) focused on the destruction of English holiday homes with a large campaign in 1979 that hit over 200 cars, caravans, and houses; most cases were never solved.[9] Their activities seemed to cease in 1993 with the jailing of member Sion Aubrey Roberts for a letter-bombing campaign. One Plaid Cymru member suggested they were provocateurs working for the British government to discredit the Welsh independence movement,[10] but such things are said about many extreme nationalists.