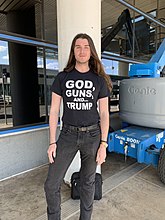 Presler pretending to clean trash in Baltimore in 2019 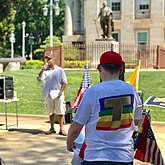 Two of the three[1] (?) known members of Gays for Trump

Scott Presler aka "#ThePersistence" (1988–) is a professional concern troll and Republican political operative. Presler is the founder of #GaysForTrump and organizer of ACT! For America, which the Anti-Defamation League says is the largest American organization of anti-muslim bigots in America.[2] Presler is best known for organizing and publicizing media stunts charitiable volunteer work, such as picking up trash in West Baltimore[3] and throwing away homeless people's property in Los Angeles[4] in order to prove conservatives are more compassionate than the so-called tolerant left. Which is something that throwing away homeless people's property obviously proves.[citation NOT needed] Presler organizes events that greenwash racist canards, using altruism as the excuse, in order to appeal to the religious right.

In 2016, Presler was employed by the Virginia Republican Party as a token gay apologist organizer, supporting the party platform to overturn gay marriage, make it legal to discriminate against LGBT people, end gay adoption, and allow child torture gay conversion therapy.[5][6] Since that election, Presler has launched a very successful social media brand strategy, targeting social conservatives who want to moralize and be racist at the same time. Much like Diamond and Silk, he uses his position as a minority to reinforce the idea that the people fighting bigotry are the real bigots. By tweeting videos of his political theater at hundreds of establishment Republicans, including Trump, he gained hundreds of thousands of followers, and where he repeats the talking point of the day.[7] This blind loyalty has led to him being a speaker at CPAC and an up-and-coming star of the Republican Party.[8]

In 2017, Presler organized a “March Against Sharia” with ACT for America, alongside white supremacist Billy Roper who stated:

The march also reportedly organized with Joey Gibson’s Patriot Prayer group march in Portland[10] and there were reportedly many other neo-Nazi group members in attendance.[11]

Presler attempted to parlay the negative press into a College Campus Free Speech tour, co-sponsored by Turning Point USA, where he would give dramatized, emotional speeches about the threat of radical Islam to places like rural Ohio.[12] This was intended to get the organization free advertising by triggering students and feeding into the right-wing free speech moral panic. However by 2017, it failed to gain traction, and he went back to work as a field director for the Virginia Republican Party, touring the country holding “activism” seminars.[13]

The “activism” included condescending #CleanUp events in black neighborhoods in Baltimore, San Francisco, Los Angeles, as well as at the US-Mexico border. These amount to thinly veiled political rallies and photo opportunities for local media and social media coverage.[14] Presler routinely uses these events to give over-the-top, demagogic speeches about the death of the country to attendees.[15]

In 2018 his Gays for Trump organisation organised a roaring massive march in Washington D.C. with numbers almost reaching a dozen people. There were more counter-protesters than attendees and 100 people observing the pitiful event.

In 2018, Presler started the “Blacks Before Illegals” campaign, copying the Black Lives Matter logo, in a failed attempt to astroturf racial division.[16] This campaign would go on to get him suspended from Twitter for saying totally even-tempered, non-sweeping general statements like “Black lives murdered by criminal illegal aliens don’t matter” and “criminal illegal aliens are raping our 6-year-old girls”.[17]

Presler isn’t afraid to nod at fringe right-wing conspiracy theories and share them with his hundreds of thousands of followers. These range from a Seth Rich truther[18] to pushing the idea that the COVID-19 plandemic scamdemic pandemic is fake and hospitals are actually empty.[19]