From RationalWiki
(Redirected from Dystopian)
Jump to: navigation, search 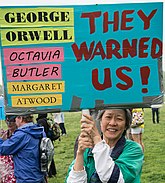 A dystopia usually refers to the disastrous result or results of attempting to make the world or humankind "perfect." It is a play on the title of the book Utopia by Sir Thomas More, about a perfect society where everybody is happy and has everything they need. In a dystopia, society has been arranged according to some plan that ends up making almost everyone miserable and needy.

The word dystopian can be used as a snarl word in many cases, particularly when applied to conservatives or rightist reformers. Anyone who wants to make the world a worse place (except for "them" and "their kind") can be called dystopian, no matter how pragmatic they are in doing so. It is often forgotten by true dystopians that one person's dystopia can be someone else's heaven.

A real-life example would be the Third Reich or the results of some of the Communist states. Interestingly, in all literary dystopias, there must be some base level of material wealth—all of the characters should be eating (or drinking), if not well, and there needs to be some kind of technology.[note 1]

Dystopian environments are the setting for numerous fictional works, and the study of dystopian worlds has spawned an entire genre. The novels Brave New World, Nineteen Eighty-Four, and We describe dystopian societies; all three of these novels have become icons of the genre and have enjoyed considerable critical success. We is the oldest of these and considered the innovator of the genre; most of the conventions of the genre can be traced back to We.[note 2]

The censored edition of 1984