Image manipulation is the art of transforming an image to convey what you want, rather than what the original image may have shown. This can be done for artistic reasons, but because of the power of the photograph to show true depictions of reality (and the high regard that people can hold for a picture as evidence), this can also be done for reasons of deceit. The process is sometimes known as airbrushing, after the tools that can be used to achieve the result, or photoshopping, after Adobe Photoshop, the most common image editing tool used in the digital age.

Manipulating images dates long before the invention of the camera, as portraits of people (as well as landscapes and scenes) were painted with a little "artistic interpretation". As a result, many portraits of individuals were painted to be much more flattering. This trend was briefly bucked by Oliver Cromwell for a painting of him by Sir Peter Lely, where Cromwell was alleged to remark "but remark all these roughnesses, pimples, warts and everything as you see me." This was later reduced by various accounts to "warts and all", and the phrase has become a idiom for truth telling, regardless of how ugly it may be.[1] With the advent of photography in the 19th Century, kings and queens no longer had the ability to manipulate their painted portraits, and so could be photographed as an exact likeness. This trend was to set the precedent for photography producing true likenesses of people and events, with no room for fakery.

However, along with pornography, photographic manipulation began almost as soon as photography was invented. Some of the earliest recorded manipulations come from Civil War era America, where composite images were made of Abraham Lincoln and Ulysses S. Grant.[2] These early manipulations were done using inks, airbrushes and darkroom techniques, but since the 1980s, almost all manipulations have been done via computers. Airbrushing and photomanipulation is now accessible to almost anyone and Adobe's Photoshop makes regular appearances on lists of most pirated software.

The most malicious use of image manipulation is arguably found in historical negationism. Joseph Stalin was particularly fond of the practice when trying to make people completely disappear. Propaganda pieces have not only regularly removed people from history, but also added them into unrealistic contexts. During the 2004 US election, John Kerry found himself at the mercy of a hoax photograph showing him with Jane Fonda at an anti-war protest. Despite the fact that Kerry and Fonda were never recorded as having shared a podium with each other at any event, let alone an anti-war rally, the hoax damaged Kerry's war record amongst more gullible people.[3]

The digital editing of newspaper photos, those taken of the events being reported, are often strictly controlled by the news organisations themselves. In 2006, award-winning photographer Patrick Schneider was fired after it emerged that he tampered with the background in one of his photos. The change was simple - restoring the colour of an underexposed photograph - but the newspaper's policy was clear, and Schneider lost his job.[4] It's important to remember that you don't have to do anything particularly impressive to photographs to change context at all. Simply being selective about what images are published, how they're taken, or cropping the right way[5] is enough to completely change the mood of an image and the accompanying story. More blatant manipulations[6] sometimes slip through and are published, but often very quickly retracted and the photographers dealt with.

In the case of covers for magazines, it is a bit more of a grey area. These are often "conceptual" in nature but still generate a few controversies. In 2010, The Economist published a cover of Barack Obama apparently in lone contemplation over the Deepwater Horizon spill. However, in the original image, Obama was not alone and it became clear that photo editors had removed Coast Guard Admiral Thad W. Allen by cropping the image, and parish president Charlotte Randolph by more direct airbrushing. Some aspects of the press accused the magazine of outright deceit and engaged in a little molehill mountaineering on the subject. The Economist defended its position, stating that as a cover, it was designed as an advertisement rather than supposedly an accurate reporting picture, and that the presence of two unknown individuals next to Obama may have confused the reader. They also pointed out that no fuss had been made with other, more heavily edited images that made it to the front cover, including Obama with a bandage on his head, and Obama with the background entirely removed.

In recent years, photo manipulation has received a lot of criticism for its use in altering the appearance of human bodies to unrealistic ideals. Indeed, this comes full circle to the world of flattering portraits. Spots and blemishes can be easily removed, giving the illusion of perfect skin, while wrinkles can also be removed to give a more youthful appearance. With the use of Photoshop's "liquify" tool, a manipulator has almost infinite scope to adjust a model's size and features.[7]

In August 2010, the UK Girl Guides (notably the largest UK organisation for young women) launched a petition for the compulsory labelling of all airbrushed images.[8] The proposal was positively received by members of the government and the Advertising Standards Authority, although no plans have been made to introduce the law. However, the petition itself doesn't offer any details of how such a law would be interpreted or implemented.[9] In 2012, a 15,000 signature petition was delivered to Seventeen magazine to start showing non-airbrushed images as a continuation of the backlash against image manipulation in magazines.[10]

The field of airbrushing and image manipulation is a wide-ranging discipline, which at one end involves subtle colour correction and background alteration, all the way to full blown photomanipulation, which is an art form in itself.[11] Certainly, image manipulation when in reference to news items and reporting is heavily controlled, but artistic images found in magazines are considerably more open to subjective interpretation. Magazines aimed at young people have a tendency to voluntarily control their manipulated content. In 2009, Australian teen magazine Dolly went "airbrush" free for one issue,[12] and some have policies against "overdoing it". The trend against manipulation (or at least altering body shape) has also continued into advertising, with British highstreet chain Debenhams going against some forms of image manipulations in its advertising material.[13] To what degree this backlash is necessary isn't clear, as some polls suggest that - despite fears - teens seem well aware of image manipulation and don't, at least consciously, use such imagery for role models.[14]

It isn't clear what the absolute distinction would need to be made between images that should and shouldn't be labeled as "edited" or banned - would it be illegal for an artist to create a photomanipulated piece of art without a clear warning label on it, or would magazines still be able to avoid such labelling by claiming what the Advertising Standards Association refers to as "reasonable artistic license". Undoubtedly, if exceptions were made, there would be magazine editors attempting to get as many of their images under the veil of "artistic license" as possible. Alterations in body shape are commonly looked upon as "too much" for magazines, but Total Guitar setting someone's arm on fire would be "artistic" - indicating that a distinction could be made about whether it is intended to be presented as real. However, there are some more subtle alterations such as removal of stray hairs, blemishes, correcting the lighting and skin tone. All things most commonly manipulated on photographic sets tend to be things that would be too expensive or impractical to correct with an additional shoot, and the resulting images still need to conform to the artist/photographer/editor's vision and needs.

Remarkably, with the rise of software capable of rapidly processing film, photo manipulation also extends to film. Computer generated images have long since been used for obvious special effects (giant robots and so on), but the use of CG has become more subtle and more pervasive in places where you wouldn't expect it; that explosive action packed thriller Marley and Me made extensive use of image alteration to change seasons throughout the film,[15] and most exterior shots on modern TV are, in fact, green screen effects.[16] Though these forms of manipulation are done for practical reasons, what the actors look like and their performance can also be altered. Music videos are regularly given a form of airbrushing in post-production (their relatively short duration means the effort isn't too much) and actors' facial expressions can also be altered in post-production in much the same way as in a still image. Even more extensively, digital skin grafting can offer the ultimate face-lift, as was done for Patrick Stewart and Ian McKellen at the start of the third X-Men film.[17] 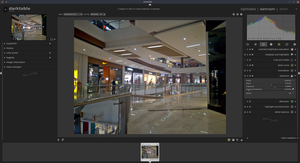 A popular way to manipulate image from camera is by using a RAW developer, like darktable or UFRaw (both open source!)

A certain amount of image manipulation effectively takes place while taking a photo. What to include when framing can impose a considerable amount of bias on an image.

On a more technical level telephoto lenses can be used to make objects appear closer together although this may or may not be the photographer's intent. Other less common activities include the use of soft focus lenses (which have largely been supplanted by photoshop) and tilt shift lenses (which can be used for perspective correction and messing around with the plane of focus). Filters can be used for various effects but again have to a large extent been replaced by photoshop.

A more modern issue is that the ability of modern DSLRs to sustain high photo rates (ten frames per second or faster) for extended periods allows photographers to take a stream of photos then select the one taken in the 10th of a second where a person's expression was slightly off.

NASA manipulation of Apollo photography is a recurring theme of NASA haters and enthusiasts of Lunar anomalies. In particular, allegations from former NASA contractor Ken Johnston that he personally saw technicians doctoring the Hasselblad images shot by the astronauts have been taken up and publicized by haters such as Richard Hoagland and Mike Bara.[18]

The color images were shot on 70mm reversal stock. An internegative was made of each frame, and prints run off for release to the media and the lunar science community. For release to special outlets such as glossy magazines, an additional step was taken. A fine grain print was made and retouched before the negative stage. The point of this was to remove any sparkle in the absolute black lunar sky that might have been misinterpreted as stars.[citation needed]

However, there has been a strong backlash against image manipulation. Sites such as Photoshop Disasters[19] chart when manipulation goes horribly, and sometimes humorously, wrong. Viewing sites like this that display the errors in the process are very useful in understanding what image manipulation can and does do. In April 2010, musician Britney Spears released a set of images showing the raw files next to the altered ones. A brave decision in a world of perfection (and with a slight air of "publicity stunt", perhaps) but undoubtedly an effective way of being able to spot the techniques involved, and to raise awareness of how subtle (or not) it can be.