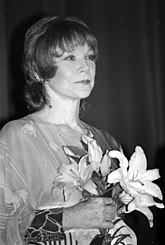 We're all figments of her imagination.

American author and Academy Award-winning actress, Shirley MacLaine (1934–) became a New Age woo-meistress in the 1980s. Her books Out On a Limb (1983) and Dancing in the Light (1986) helped popularize New Age beliefs, from reincarnation to channelling. Some of her subsequent acting roles have been based on her status as a New Age guru.

MacLaine promotes a lot of various new age beliefs in her books. These are a few notable examples:

MacLaine claims that she has lived several past lives in many countries, including one in Atlantis where she was the brother of the spirit Ramtha.[1][2] She holds the view that karma is influential when it comes to reincarnation, something common in Hinduism, which many New age beliefs steal borrow ideas from. She took it to extreme levels, however, when she said that the jews may have done something horrible for the holocaust to occur, Stephen Hawking subconsciously wanted ALS and other horrible victim-blaming in her book What If…: A Lifetime of Questions, Speculations, Reasonable Guesses, and a Few Things I Know For Sure.[3]

Aside from promoting metaphysics, she has also promoted alternative medicine in various books, such as Sage-ing while age-ing. In the same book, she also supports transcendental meditation.[4].

MacLaine has written about UFOs witnesses[5] and she believes that they want to save our planet as it disturbs the rest of the universe, or some other bollocks that is unsupported by science.[6]

"I think Cher was right. You are an asshole!" - Shirley MacLaine to David Letterman, after Letterman poked a little too much fun at her New Aginess.