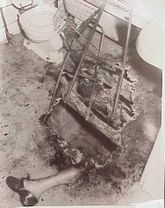 Dr. Bentley's leg and slipper, possibly the most famous and iconic image of SHC. Yet, the fact that the slipper and lower leg survived the apparent inferno gives clues to a more naturalistic origin or the phenomenon.

Superstitious Spontaneous Human Combustion (or SHC for short) is a pseudoscientific phenomenon in which the human body will burst into an all-consuming flame without any apparent source of ignition. The popular perception of the phenomenon is of someone bursting into flames, almost randomly, and being consumed within seconds or minutes. The reality is less dramatic, although the results are the same.

SHC as depicted in a later edition of Bleak House] by Charles Dickens (1895) MacMillan.:423

The first recorded case occurred in 1663 when a Danish anatomist reported that a French woman had been consumed by flames while she slept, leaving her straw bed untouched. Hundreds of reported cases follow a similar pattern; the victims are almost always alone and coroners have always noted a sickly sweet smell in the room where the incident occurred. Interestingly, while the torso and head are usually burnt to ashes, the extremities and surrounding objects such as newspapers and clothing are typically untouched. These unusual circumstances have led to SHC receiving a lot of attention from those interested in the paranormal.

Charles Dickens depicted SHC in his 1852-1853 novel Bleak House, with 'Krook', the rag and bottle merchant spontaneously combusting.[1] Dickens claimed that there had been about 30 cases of SHC, including that of Cornelia de Bandi Cesenate.

[1]:x Even as the novel was published, there was criticism of Dickens' paranormal explanation for the phenomenon.[2]

In contrast to a lot of pseudoscience, spontaneous human combustion is a very real phenomenon. People have really been found burned to ashes in very odd circumstances. These events are rare, and the circumstances around them seem to be very out of the normal; however, they do not "defy explanation" as many proponents of mystery and woo would suggest.

SHC is an example of the demarcation problem, where there the phenomenon is demonstrably real, but there is a gradation of explanations from science to pseudoscience.[7]:161-162

Even in strong fires, there are often bodily remains to be found and crematoriums still need to pulverize remaining bones, despite prolonged burning at high temperature. The idea that all remains could crumble into dust makes SHC look like an extremely spectacular event. With spontaneous combustion, most of the body is entirely destroyed and the fire is very much localised, so there is clearly something different going on.

Various theories have been proposed to explain spontaneous human combustion including having excessive amounts of alcohol in the system, static electricity and even a new type of subatomic particle that causes the cells to explode.[8] These don't really go anywhere, though. In the case of excessive alcohol, blood certainly doesn't become flammable even if a person is nicely pickled from a full quart of vodka. The toxic properties of ethanol cause death at about 0.5% concentration — and given that you need well over 50% concentration to set fire to a water/ethanol mixture this can't be the cause. Static electricity too is fairly benign. While static discharges can be the trigger for fuel explosions they can't set light to the human body, otherwise stepping out of a car wearing the wrong pair of shoes would be far more dangerous. And, well, exotic particles is just silly.

Paranormal investigators would prefer that the explanations remained mysterious (hence the "spontaneous" part), as nothing is better than a good mystery you can put your own spin on — whether it be aliens, ghosts, or magic. This is why bizarre theories like exotic particles and static electricity are proposed. These are so outlandish and so improbable as natural causes that they might trick people into believing that supernatural causes are viable. However in the end, the most likely natural explanation is far more mundane than paranormal investigators lead you to believe, and this is backed up with experiments.

So, consider the facts that are known about SHC. The fire is intense enough to burn bone and completely destroy all flesh. This is something not observed in normal house fires because they're usually very rapid, and so we can conclude that, despite the "spontaneous" label giving hints of something rapid, it must be a slow process. Then we can observe what does remain. In the case of Dr. Bentley, his foot and bare leg survived. The fire also seems localised, with only the body burning, so despite the intensity and longevity of the fire it must be somehow confined to the body alone.[note 1] So considering that the fire is intense, long and is localised to the body but not unclothed areas, we can piece together clues to explain SHC. The most likely explanation is that the victim's clothing acts as a wick and body fat serves as a source of fuel. This is very much like how a candle works, although in reverse; indeed wrapping wick-like material on the outside of a candle still leads to the same effect. The burning clothes are maintained by liquid fat causing a controlled, slow and very intense burn — intense enough and prolonged enough to cause the damage seen but without spreading the fire. This contrasts with the paranormal explanations and descriptions that view the combustion as rapid and dramatic, with almost no explanation. The explanation would also account for the sweet smell noted by those who find the body, as sugars and fats within the body have slowly been vaporized over the course of the event.

Furthermore, this theory has been tested with defunct animals (pigs and humans) wrapped in cloth, with results that match the observed effects of SHC.[9]

But what of the various stories that cite people bursting into flames? Stories still persist of it happening suddenly, as if a human body did just catch alight for no reason before vaporizing in seconds. Well, pics or it didn't happen.