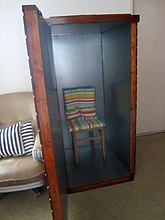 An "orgone accumulator," based on Reich's original design.

A modern-day "orgone accumulator," composed of epoxy resin and metal shavings. There is probably a quartz crystal in the middle as well.
Were you looking for other uses of Orac?

Reich came to the conclusion that orgone energy would be absorbed by organic substances because of his (woefully inadequate) knowledge of "radiation" — by which he meant "nuclear" radiation, e.g. the spooky stuff that comes out of radium. Somewhere along the line he heard that organic matter absorbs radiation,[1] and that was all he needed to convince himself that orgone energy "must" behave the same way.

Objects (including people) could then be placed inside such a device and be exposed to well above background levels of orgone energy. Of course there is absolutely no evidence that orgone exists so any device designed to "accumulate" it in one place can be immediately written off. Orgone accumulators were proposed to cure everything from mental disease to cancer. It is the ultimate mix of woo and pseudoscience.