From RationalWiki
(Redirected from Pig)
Jump to: navigation, search 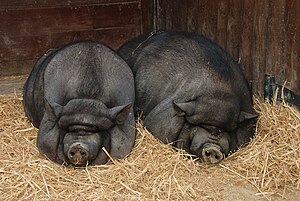 Pigs. This particular breed, the pot-bellied pig, comes from Vietnam.

A pig is the raw form of pork, bacon, ham, and sausage.

Pigs will eat almost anything - fresh fruit, rotting vegetables, eggs, cheese, even rancid meat. American farmers don't say "feed the pigs". They say "slop the hogs". If you ever drive past a pig farm, take a deep breath. Like dead, rotting flesh, a pig farm produces a smell that you will never forget.

The scientific name for pig is sus!!!111

Slang, idioms and other popular usages[edit]

"Pig" is a derogatory term used to describe a police officer. It is uncertain how this slang originated.

But in general, the most common use of the word "pig" refers to somebody who happily lives in squalor.

God hates pigs!!!! In pretty much all of the Abrahamic religions, pigs get the short end of the stick. In Judaism, pork, bacon and all pig-related products are non-kosher meat. It says so in Leviticus which is a pity because pig-related products tend to be quite delicious. They're also non-halal meat in Islam. In fact, pigs and monkeys are said to be reincarnated Jews in Islam.

In Matthew 8:28-34, Jesus approached two demon-possessed men. When Jesus began to exorcise them, the demons asked that Jesus cast them into a herd of pigs. He did so, causing the pigs to run into the sea and drown themselves. The herdsmen then ran to the nearest town to report what they saw.[4][5]