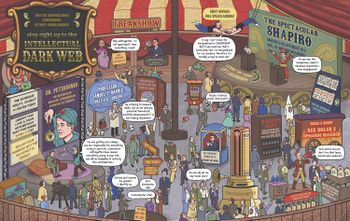 The Intellectual Dark Web (IDW) is a neologism coined by economist Eric Weinstein to refer to an informal group of (mostly right-wing, libertarian and centrist) pundits, media producers, academics, and so on.[3] The term itself functions as a general meme. There is no actual organization, or movement which it represents. In other words, anyone can say they are a member, and no one has the authority to deny it.

Individuals associated with the term[edit]

Newer non-core additions to the network include:[7]

After Sargon of Akkad was banned from Patreon, Rubin, Peterson and Harris left Patreon in protest.[8] Since then, Rubin and Peterson have suggested creating a Patreon equivalent.[9]

A gateway to alt-right radicalization[edit]

In 2019 a study from the Federal University of Minas Gerais

by Manoel Horta Ribeiro et al. found the Intellectual Dark Web's YouTube channels were a gateway from the "alt-lite" to alt-right radicalization.[10] The study looked at 331,000 videos that an algorithm had classified as right-wing, and analyzed 72 million YouTube comments.[10]:4 A large number of those users who had posted comments on IDW channels later migrated to leaving comments on more radical YouTube channels.[10]:7-8 As Ribeiro puts it, "there is migration among users from the Alt-lite and the I.D.W. to the Alt-right," confirming that less extreme right-wing content did indeed serve as a gateway of sorts for radicalization.[11]